Art enables us to find ourselves and lose ourselves at the same time.

Someone must have punched the sky where it really hurt because it rained so hard, you’d think hail was crashing through your windows. Today, I was supposed to go to Itaewon with someone in my group, but she didn’t feel like it because it was raining so hard. But I wasn’t about to waste my day. I decided to take up my mentor’s suggestion and go to the Coex Mall in Gangnam to see the Seoul 2017 Illustration Fair.

I’m not going to lie. It took me a while to get up the courage to go by myself because my phone was nearly dead, and I didn’t want to stay another two hours waiting for it to charge. So, I took screenshots of directions and left. The train ride took about an hour. It was probably the easiest part of the trip. As soon as I stepped into the mall, I went into lost puppy mode. I had no clue where to find this fair in this maze of a place. After wandering for a good thirty minutes, I finally found an information desk that directed me to the first floor of the mall. (I was in the basement).

When I went up to the first floor, I still had no clue where to go. I’m glad I saw a billboard flash “Illustration fair 3F” because I was about to go to the first long line I saw and wait in it. (The long line was for a men’s show or something. It looked pretty seductive).

After making my way to the third floor, I found out that I was on the wrong side of the complex. I went to yet another information desk, and the ladies told me I had to walk through exhibition halls until I saw a flashy sign saying “Illustration Fair.” It was pretty easy to find, actually. Trying to figure out how to get in was another story. 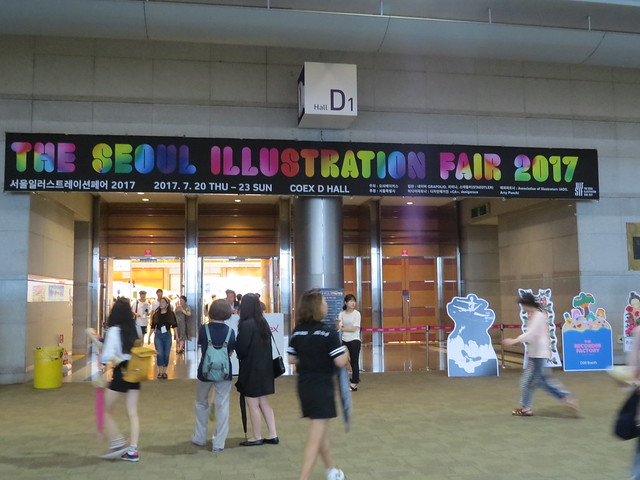 There was a display of award winning pieces in the hall, and all of it was absolutely stunning: 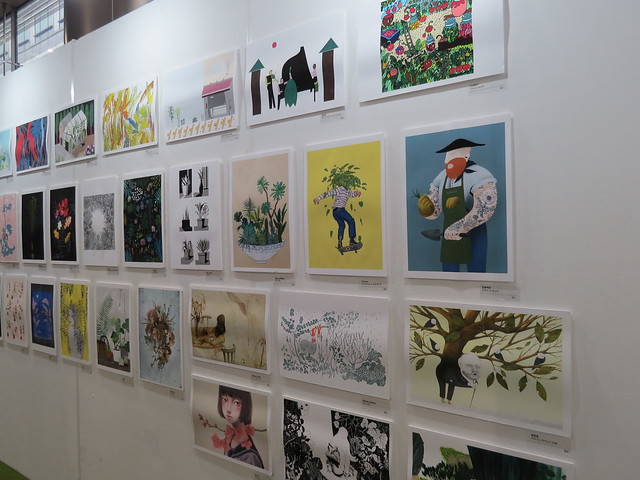 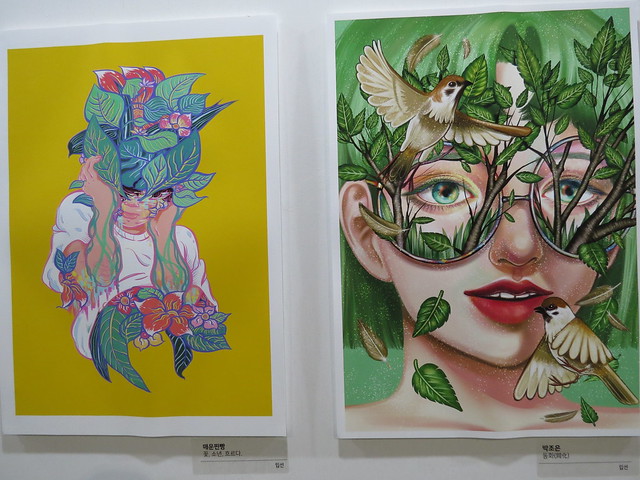 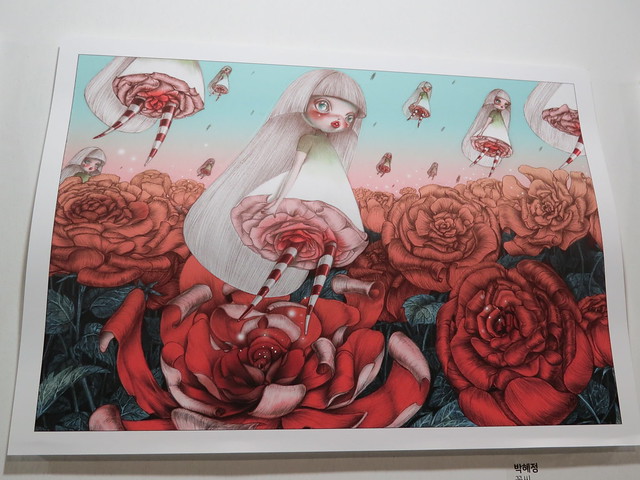 I stood in one spot for a good ten minutes observing what the crowd was doing before I figured it out. A man directed people to one side of the hall, so I followed until I reached a booth that had registration forms. I filled mine out and waited in line. (I didn’t know what line to stand in for the longest time, so I chose one randomly). When I reached the front of the line, the women only spoke Korean. She flashed a 1,000 won bill, so I knew the ticket would only be $1. (To be honest, I thought the fair was free, so I was glad to hear it was only $1). I brought out two 500 won coins, and she quickly rejected it. I felt really bad because I didn’t have any cash on me, but by god, I was not about to turn back after all I’d been through. Luckily, debit card was acceptable. I paid, got my wrist band, and finally entered the exhibition hall. 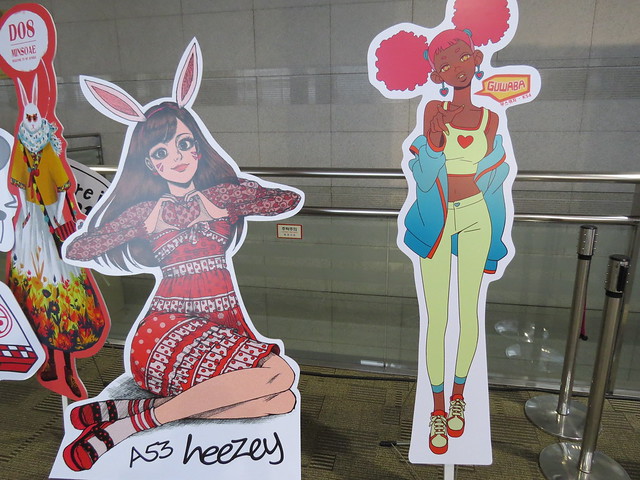 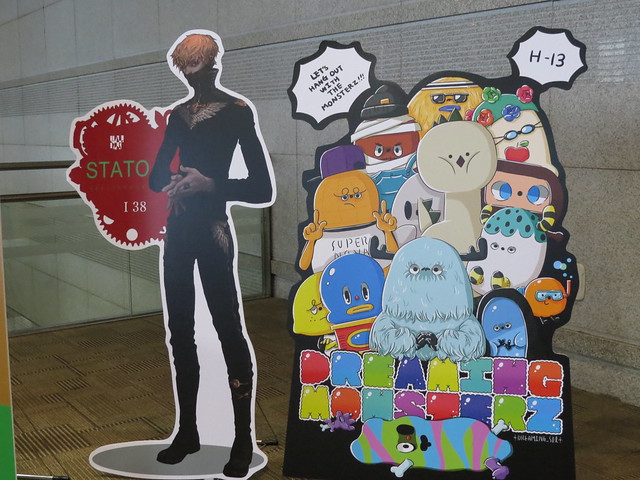 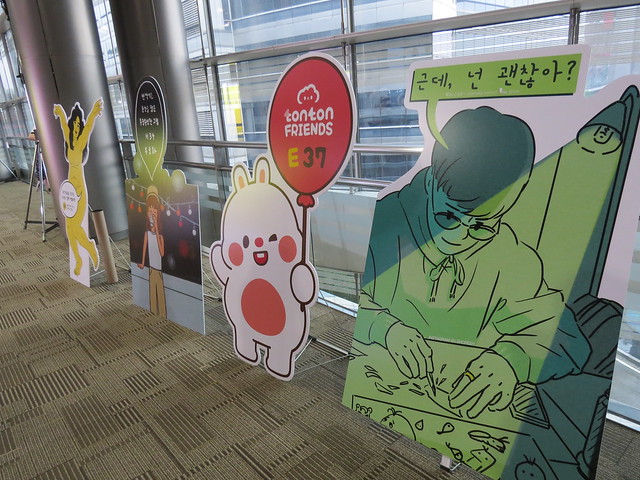 Hundreds and hundreds of people flooded that hall. There were over 600 booths to see, and I had no clue where to start. So, I decided to go down each isle and take my sweet time doing it. I was quick to whip out my camera too (after contemplating for so long whether it was respectful or not to take photos) because everything was so beautiful and breathtaking. Seeing so many different art styles didn’t make me envious, but it gave me a wave of content and disgorgement. These conflicting feeling kept me going, though. 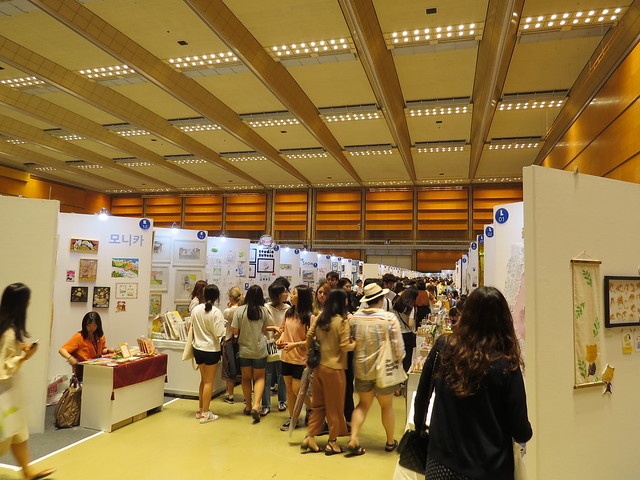 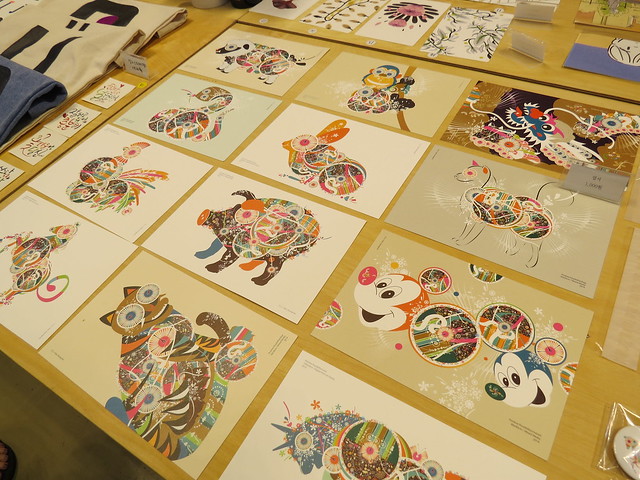 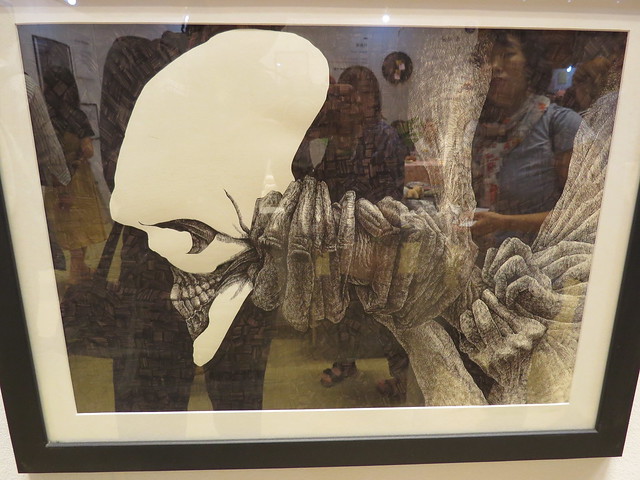 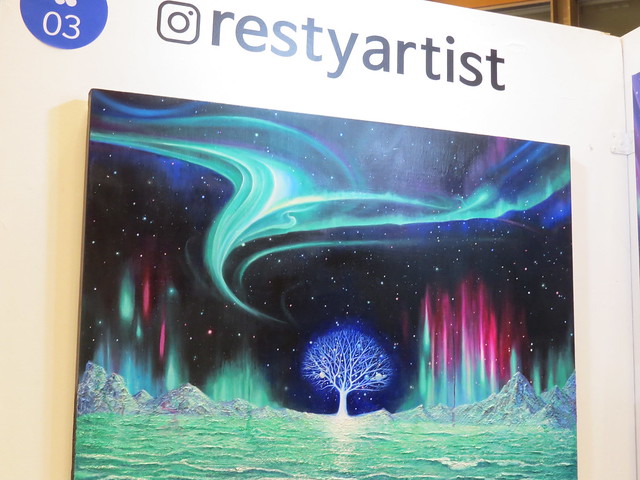 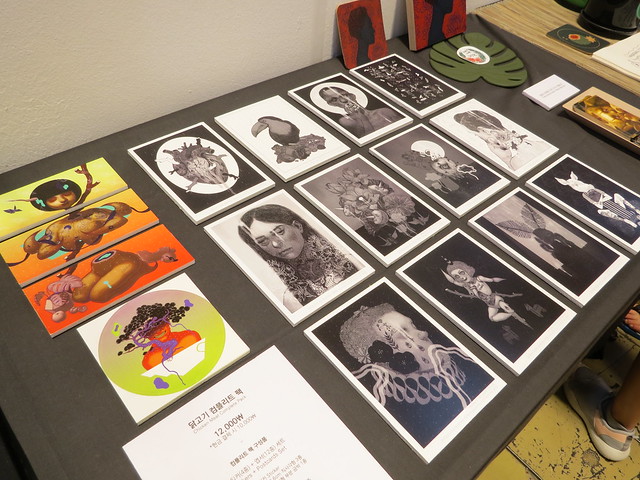 As I took pictures, I collected business cards of the artist I like most. There was one in particular that I really like because his style was a mixture of cartoon and realism. That’s what I want my graphic novel to look like, or at least something similar. (His name is Hye Lyn Kim [Hyesae] by the way). 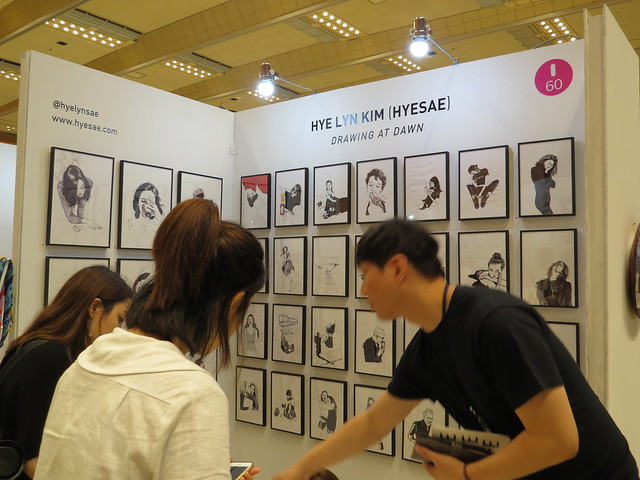 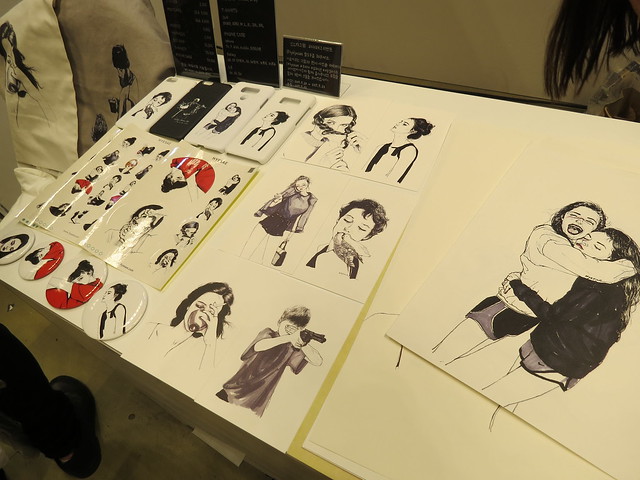 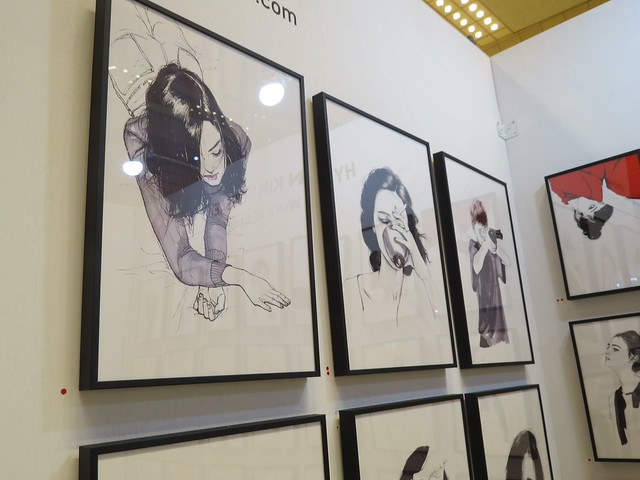 I ended up going to all the booths. At one point, I stopped with one of the French artists named Gemini. H (who had amazing paintings) and asked how I could practice drawing when my main focus was on writing. She said I just had to make time. If I really wanted to improve, I could do it no matter what. She also told me to do what I want, art wise and not to let anyone tell me otherwise. I really appreciated her talk with me. I felt inspired after that. 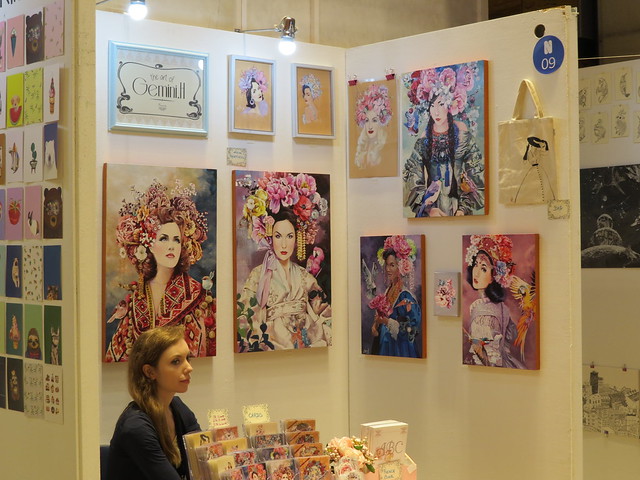 There was one section of the exhibit that I explored last. It was called “The Dark Place” or something like that. This place housed Japanese artists and their artwork. Apparently, I arrived just at the right time to see an artist named Hiroyuki-Mitsume Takahashi perform a live demonstration. It was something. But I got hot standing among the crowd and had to get out of line before going back in to finish recording. (After, the artists manager came up to me and gave me her business card, asking me to email her the videos and pictures I took). 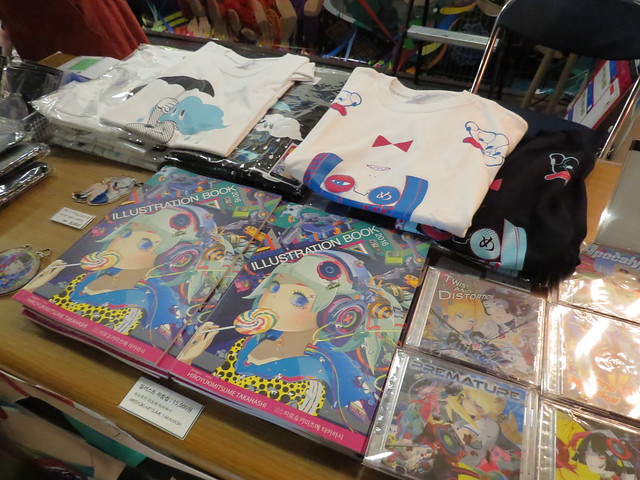 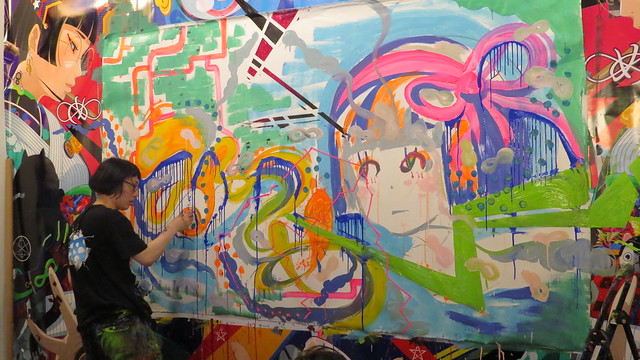 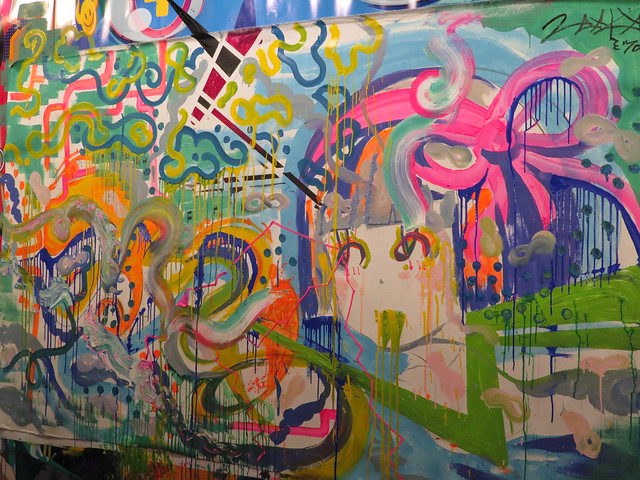 At this point, I could barely keep my eyes open. I left to revisit two of my favorite booths before leaving. I ended up buying two post cards from Artist Alice, and I went to check out Hyesae once more. Then, I went back to the basement of the mall. 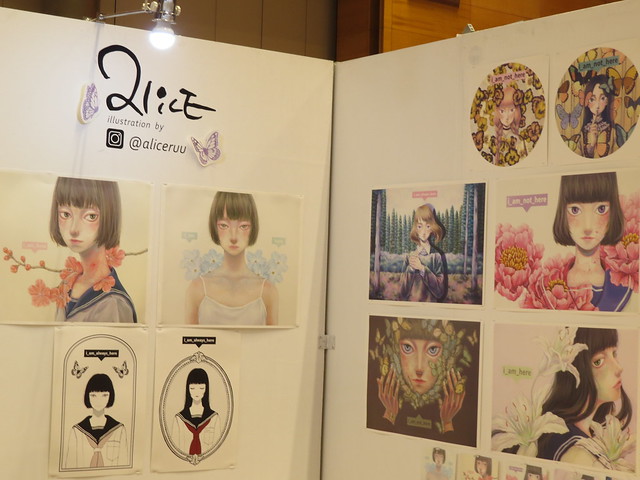 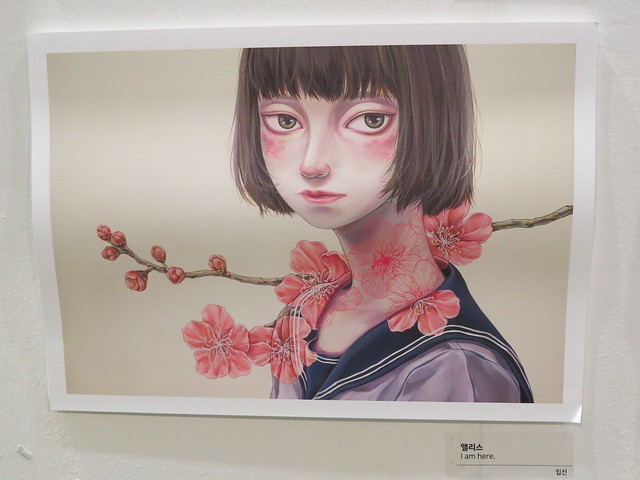 I didn’t go back to the hotel immediately because I wanted to go to a department store to find Korean snacks and candies while I was still out. So, I went to the Coex Library, sat on the floor, and charged my phone, just in case I got lost again. 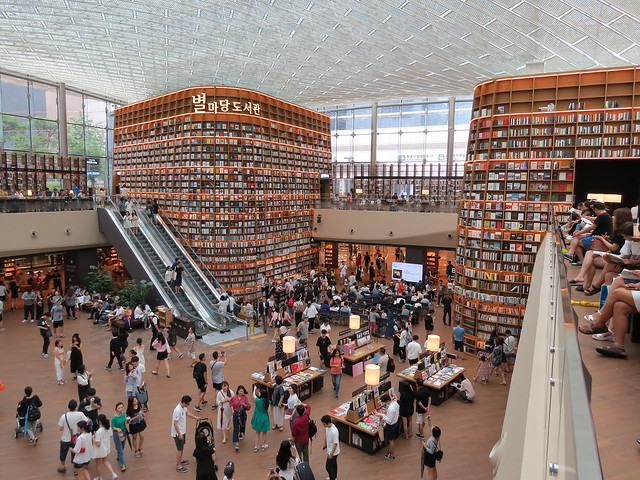 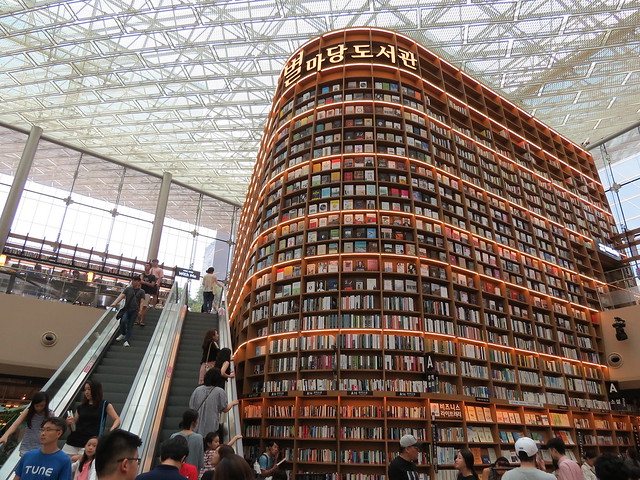 I got bored, though, and decided to venture on my own. I walked out of the mall to a Lotte store, but they sent me right back to the Coex saying they had no food there. (Luckily, the buildings are linked underground). I walked around blindly for the longest time until I finally found a department story. When I got there, however, they had not Korean made snacks. Only snacks from Japan, Germany, and anywhere else but Korea. So, I finally went back to the hotel.

I left on my journey around eleven in the morning and didn’t get back until five that night. It was a long, sweaty day, and I didn’t want to do anything else by lie in bed and write. I only have a week left in the program, and I already feel like it’s time to leave.