We must find time to stop and thank the people who make a difference in our lives.

I knew today was going to be a busy day, so I decided yet again to go into work two hours early and catch up on reading and (some) blogging. It was especially hot today, so I was glad to be cooped up in the cold meeting room, even if it was just for two hours.

As we planned yesterday, I went to the Ewha main gate to meet my mentor. I’m not going to lie. I did feel a little bit flustered when she was about ten minutes late, but then she sent me a message saying she decided to bring her car instead of taking the bus like we planned. I felt bad after that.

When she did arrive, I got into her car. I guess I didn’t say hi loud enough because she said, “You should say ‘Hi’ when you get in the car.” I apologized after.

It didn’t take long to reach Hongdae. It was a short silent five minute car ride. My mentor decided to park right next to the building she was taking me to in an elevator parking lot. This was new to me because it was a building only filled with cars. She had to drive into a small garage and they took the car up. (My mentor later told me it was scary being in the garage because she kept thinking about the other cars above her). 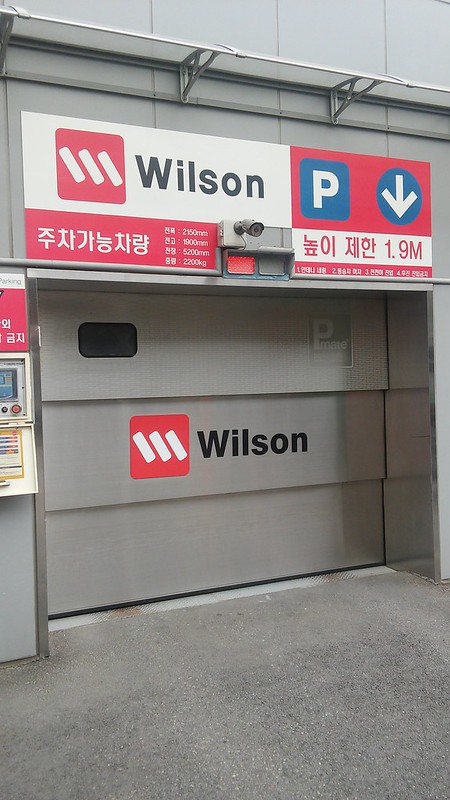 The comic book store she took me to is called “Book Sae Tong.” 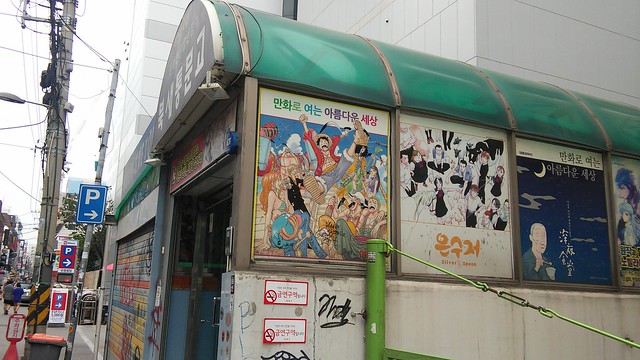 As soon as I stepped inside, a wave of happiness suddenly flew over me. Seeing all the different books and art styles made me want to draw and write at that very moment. 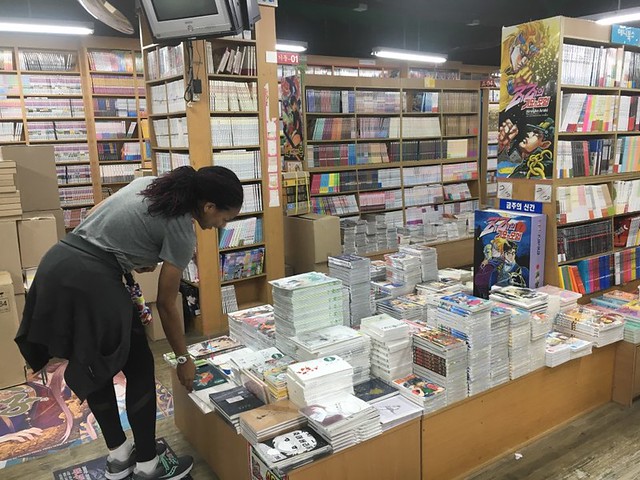 However, a lot of the novels there were Japanese graphic novels translated to Korean. I wanted to find Korean comics, so my mentor helped me find some. Then, we decided to explore the isles. I ended up finding a yaoi (male x male) isle and thought it was hilarious and daring. 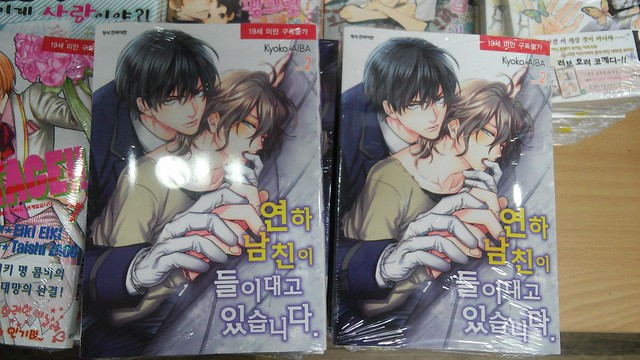 As we walked around, I told my mentor how I liked Japanese comics, but I was sick of seeing the same styles all the time. Plus, I didn’t like the over exaggerated breasts they always draw and emphasize. It’s a subconscious desire it tell you!

After buying a hilarious webtoons book called “Adulthood is a Myth” for my brother and a webtoons comic for myself, my mentor took me to an American style breakfast restaurant called “Travel Makers.” We talked a little about Itaewon when I told her I wanted to go to the Samsung Art Museum there. She said that Itaewon was the Compton of Seoul. I’m glad I mentioned I was going to the Seodaemun Prison because she offered to take me there. So, she did. 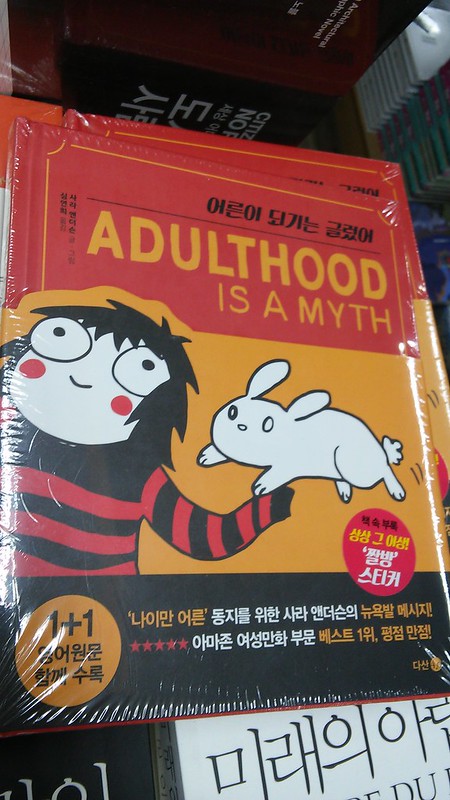 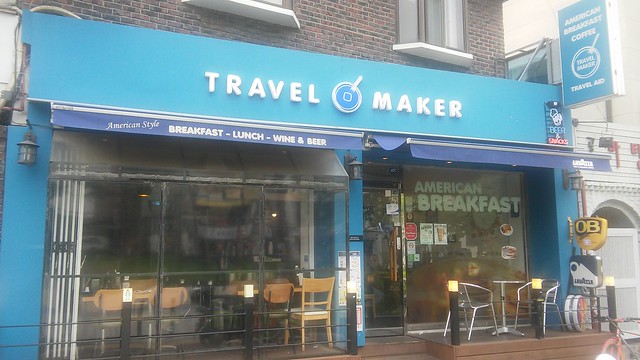 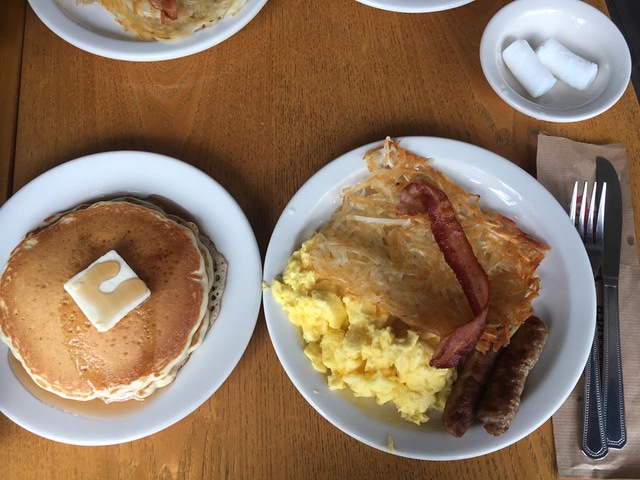 My mentor was very generous to me, so I thanked her for everything that day before she left. Then, I was on my own at the Seodaemun Prison. I bought my ticket, took my camera out, and explored. 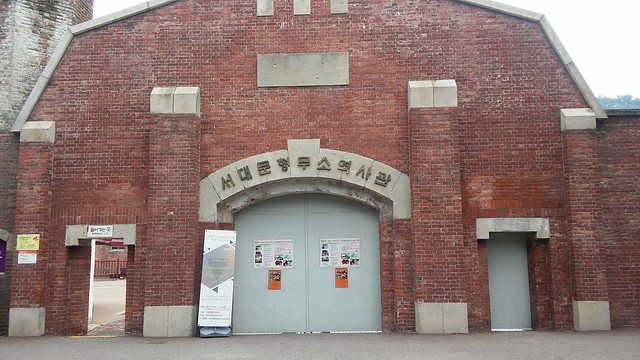 The prison had a boat load of information, explaining 80 years of Korean captivity and Japanese rule. There were (poster) guides that lead me from building to building and hall to hall. I felt extremely melancholy when I went through the torture chambers. There were models used to illustrate a torture scene. Photos of people who had died were displayed on the walls. There was a section where they had a video recording of a man screaming in one of the cells right next to the video testimonies of the real prison victims. It was really something. 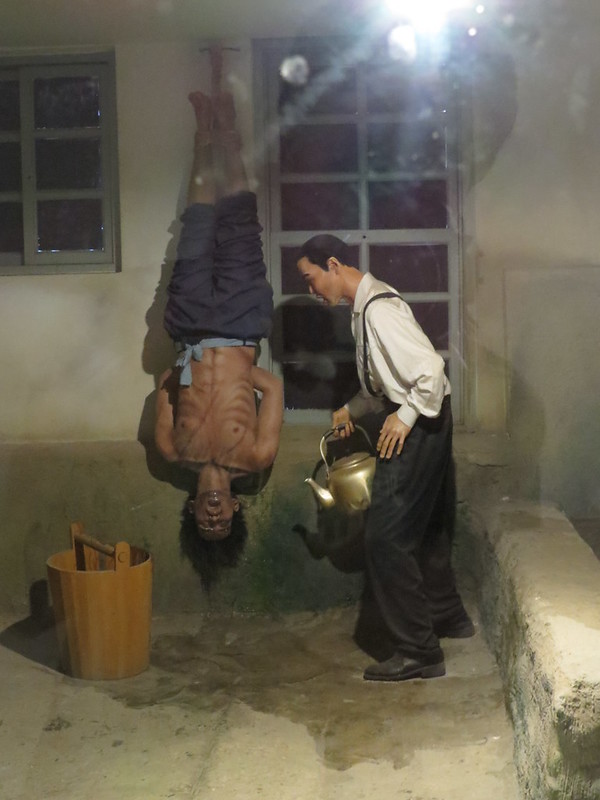 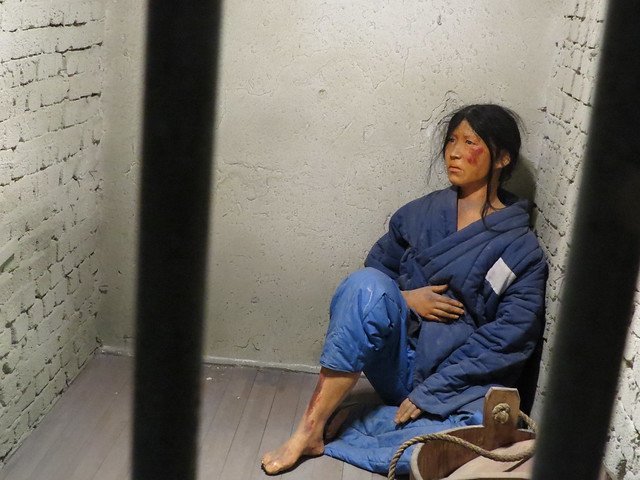 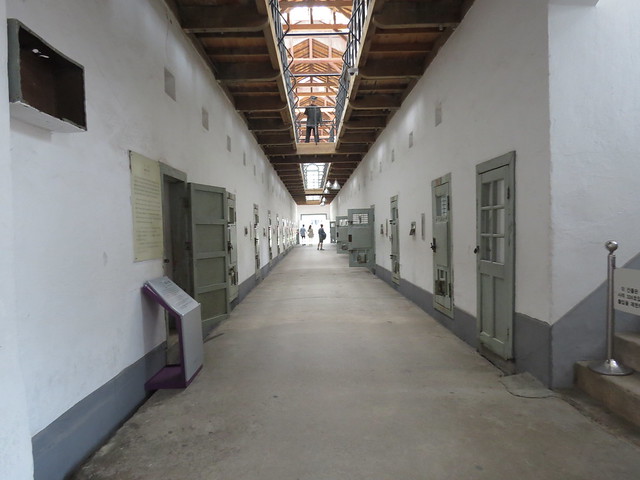 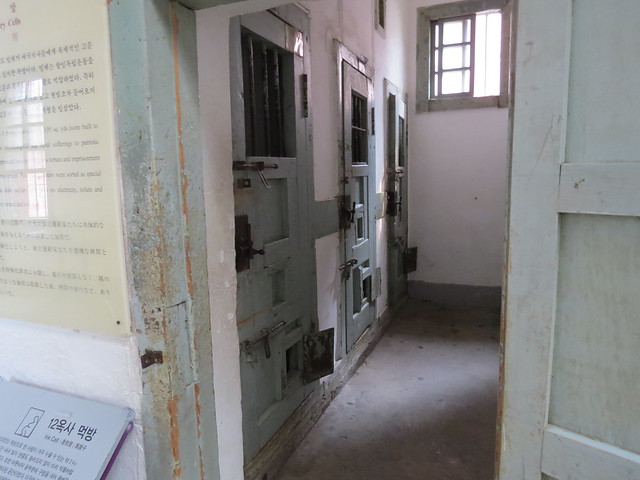 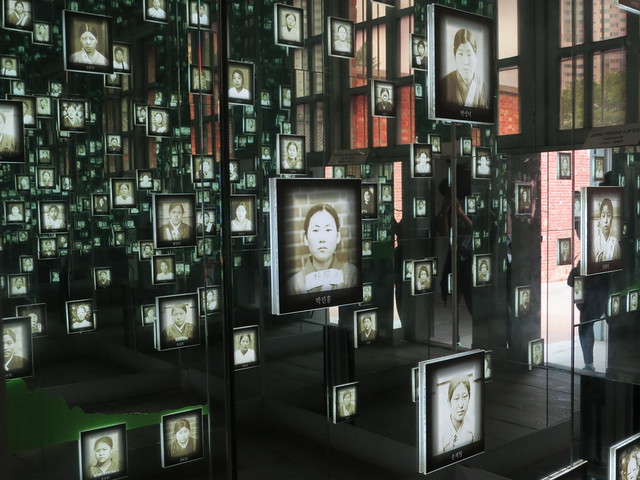 Finally, out of the torture chamber, I walked outside in the courtyard just taking everything in. It was really hot out, and the courtyard was very spread out. As I walked the path, I noticed a memorial to prisoners who had perished and a pie shaped wall for the prisoners to exercise. I felt very relieved when my tour finally ended. 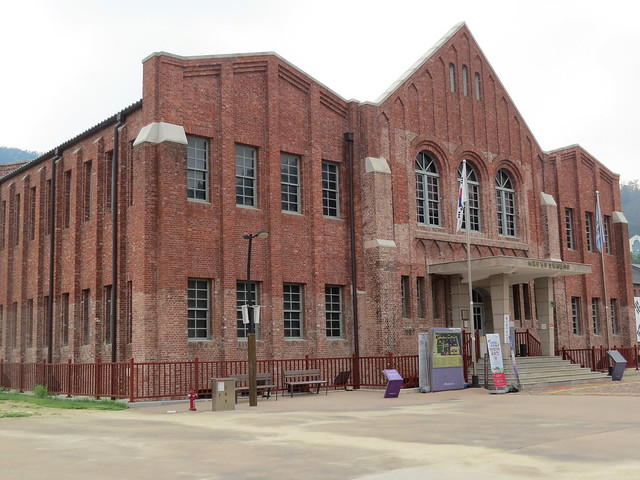 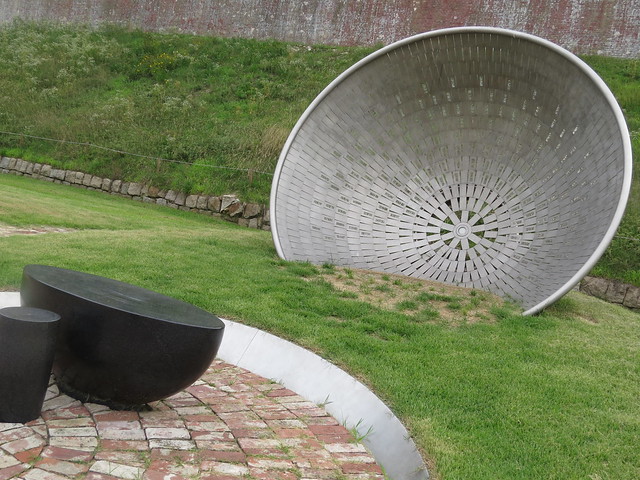 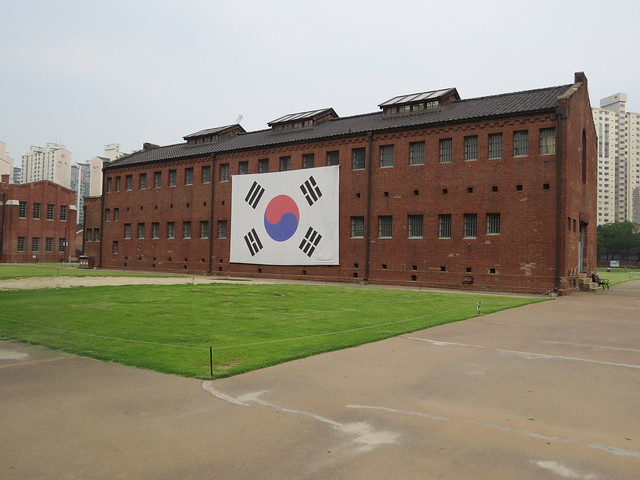 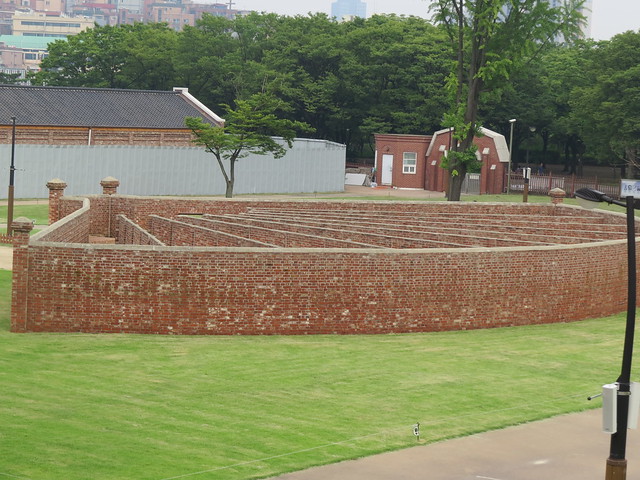 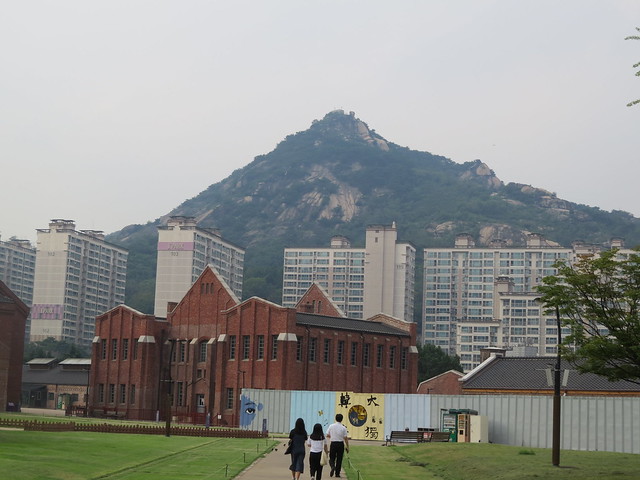 I didn’t do that much after that. I was a ball of sweat marching around in tight jeans all day. I wanted to relax and my pj’s and do nothing. But I ended up going to a buffet with a small group of friends. There weren’t many options, but god did they have great smoked salmon.

To wind down, I organized some of the gifts I bought back at the hotel, just to see if everything could fit in my bag. I lazed around after that, surfing the web and reading. Even though my mood started out a little low, I feel proud of myself for doing something productive today.