It wasn’t my better days today, at least not mentally. I felt overwhelmed trying to think of places I should go before the trip ends. On top of that, I have several projects to complete, one where I have to explore Itaewon with specific people. But of course, my group decided to put it off until the last weekend we are here with the presentation being due Wednesday. Then, I have two papers to write about my overall experience and an individual topic about comics and graphic novels. Plus, I’m late on my blogging, and I still have videos to edit.

During work today, I made a schedule of what I want to do and where I want to go. My mentor came in during this time since she finished draft of her dissertation or presentation. I felt bad because I think I was rude to her, but she gave me places I should go this weekend, including the Coex Mall for an illustration fair. She also offered to take me to Hongdae tomorrow to visit a comic store.

A few minutes after my mentor left, an Ewha student came in for our weekly speaking appointment. We didn’t know what to talk about, so she asked me to correct a paper should would write over the weekend before leaving. I decided to leave at that time too.

I still wasn’t in the best of moods when I left, but I thought I should make the most of my time before class began at seven. So, I decided to go gift shopping in Myeongdong. I felt a little better doing after doing it. It was a struggle trying to find certain places on my own without Wi-Fi, though. But I was proud when I did.

Just so you know, if you ever find yourself shopping in Korea, the clerk will literally follow you as you ogle their products to make sure they are near if you need help. It may feel like you are being stalked, but deal with it. They will hover (like you’re trying to steal something).

After throwing all the gifts on my bed, I head down to the basement for class. For once, our dinner arrived on time, so we ate as a group. we had Jajangmyeon, which is the cheapest food in Korea, but it is very tasty. 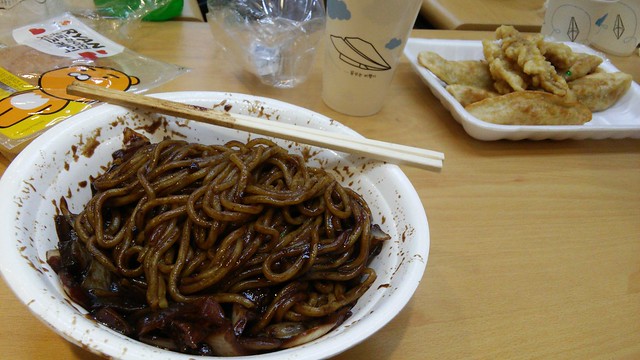 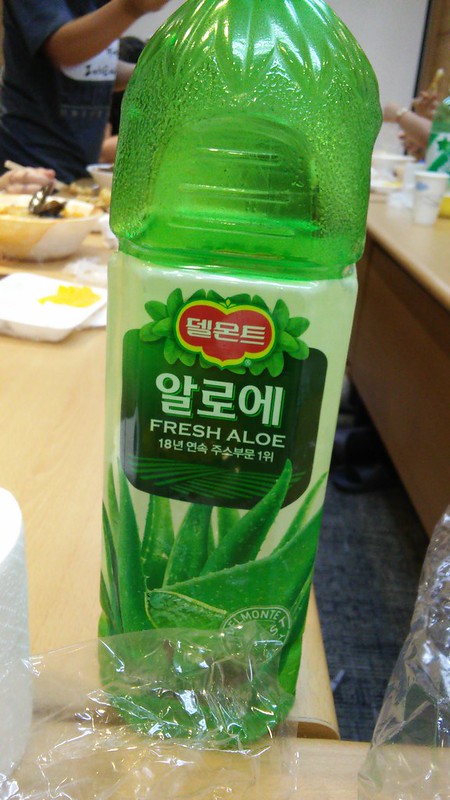 We were so into our food, we didn’t even notice our guest speaker, who is a CEO, walk into the room. It was only after the man walked out that our professor came in an explained that we had been rude. You are supposed to stop what you are doing, stand, and bow when someone important (like your boss) comes in. Once we finished our meal, we made sure to do it right the second time he walked in.

Today’s guest speaker talked about digital advancement and technology. He started off by talking about us as students and what our majors were. Then, he started talking about the first computer and its evolvement. The CEO told us that a lot of our jobs will be lost as technology improves. And he asked interesting questions, like what kind of jobs will be replaced by machines, what’s the point of taking photos if you can find them online, and will professors be replaced in the future?

Sometimes, my attention was taken away from the speaker because the projector kept going off, and once it did, a loud fan noise would fill the room. A tall student had to unplug it. Then, there were so many mosquitoes in the room, everyone was swatting like crazy. I tried to keep from laughing because one of the Purdue professors who was visiting stood up and started slapping the wall while the CEO was still speaking.

Then came the time to Q&A. Everyone was already tired after his lecture and was ready to go do their own thing, so I really didn’t want anyone asking more than one or two questions. Boy, was I wrong to even want that. One person asked a question, and the CEO gave a long ten-minute answer when a simple yes or no would do. After that, I didn’t want anyone asking any more questions, but it happened two more times! (At least they had sincere questions).

When class was over, we all said goodbye to the CEO and took photos. Before we could leave, however, the professors gathered everyone and told us about our individual meetings. In conclusion, they said, people wanted to go to more places before leaving Seoul. So, we made a plan: on Friday we will all go out to dinner, on Saturday we will visit Insadong and go on a Han River Cruise, and on Monday, we will see a JUMP show. I was happy yet overwhelmed to hear all of this because I had to rearrange my schedule. I’m planning to go to Seodaemun Prison History Hall after work tomorrow. (When I was telling the class, I said, “I have to go to prison tomorrow,” so they started laughing and asking if I would need bail).