The most dangerous risk of all – the risk of spending your life not doing what you want on the bet you can buy yourself the freedom to do it later.

I just couldn’t bring myself to walk down the street and go to the gym today, so I went down to the basement and worked out in the hotel “fitness room.” This fitness room is basically just a small room with a set of dumbbells, a message chair, and an exercise horse. I call it, “The Storage for Fitness.”

After getting my daily dose of sweat and a shower, I headed to work around ten. There I was at the large meeting table typing away when I suddenly remembered I had camera equipment I needed to return. So, I did. I went to Professor Lee’s office and returned everything. Somehow, we got into a conversation of what I had done during the weekend. I told him I stayed in my room all day Sunday. He freaked out when I said this. Actually, I guess you can say he scolded me XD. He said I need to get out and explore Seoul before it was too late. Otherwise, I would be wasting my time here. Then, he moved on to say I was wasting my time typing away in the room (even though that’s what I was supposed to do). “You can read, write, and study Korean later,” he said.

Ending the conversation, he left me with the task of figuring out where I wanted to visit before four o’clock (when it was time for me to leave). I told him I wanted to go to Caribbean Bay or an amusement park like Everland, but he quickly shooed that off. So, he gave me a destination: Seodaemun Prison History Hall. This is an old prison that tells of the history between Korea and Japan. It actually sounded pretty interesting.

I really didn’t do so much after that. I ended up finishing BTS American Hustle Life and helping an Ewha student correct an email before going back to the hotel. Some of my friends dragged me from my room to have dinner with them. The choice of the day was Chimek – chicken and beer. The chicken was spicy, so I really didn’t eat much, but the omelet we ordered was great! 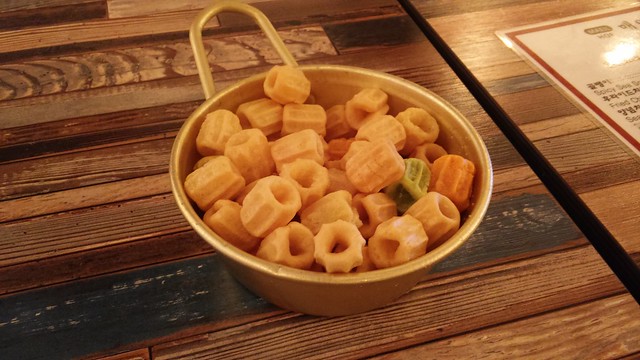 Some snacks as we wait for our food

After that, we hung out and watched Korean dramas. I mostly just took note of how much everyone cried. However, my mind often wandered. I couldn’t stop thinking about what Professor Lee said, and it made me sad a little. I guess I’m going to have to do something about that.