Comfort zones are most often expanded through discomfort.

Today was an emotional roller coaster. After taking a shower and eating this really delicious egg thing (called Gyeran Mari I think), I headed to work. As soon as I got there, Professor Lee, the man who will teach me photo and video editing, gave Kristene and I an assignment. We need to take photos and videos so he can teach us how to edit. I really wanted to do a music video to the song “1+1=0,” but I’ll save that for a later project. 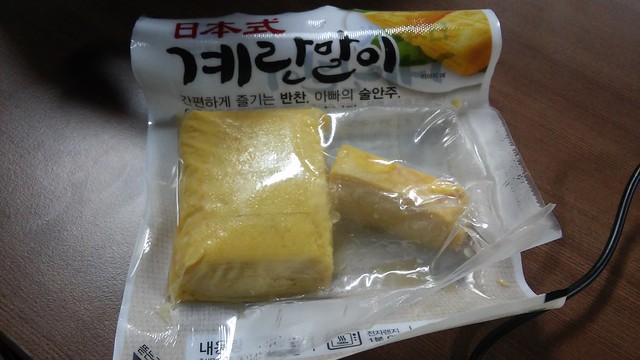 My day started turning for the worst when my boss messaged me. I was supposed to meet her for lunch, but I had mixed up the times, so I was about 20 minutes late. If you know me, you’ll know that I DO NOT like being late. I felt so bad about it.

When I finally arrived, we all went to the center for international students. They brought me us into the meeting room, so I could meet the vice president. She kept telling us to sit, but I didn’t know if I could because everyone else was still standing. So I kept bobbing up and down in my seat until the Vice President took hers. It was an awkward situation for me. Then, I was shown a video about Ewha and asked if I wanted a tour of the campus. After, they gave me an information folder about Ewha, an Ewha bag, and a boxed gift (that I later found out was a water bottle). The entire time I was sitting at the table, however, they spoke in Korean, so I felt very uncomfortable and out of place.

The Dean suddenly entered the room to say hi and take photos with us. But he left just as soon as he came. 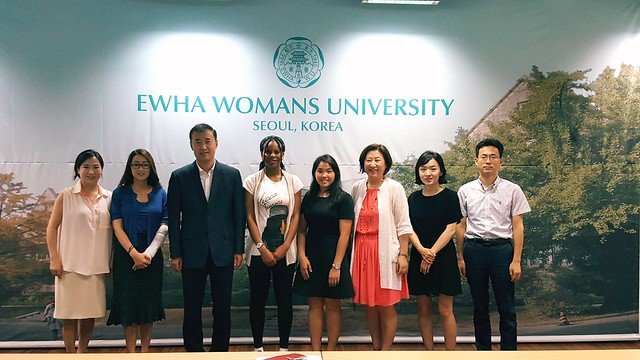 Finally, we went to lunch. My mentor came with us, along with my Purdue Professor, the Vice President, her assistant, and Professor Park, my boss. We went to a fancy restaurant on campus called “Marie.” The entire time I was at the table, I was quiet and kept looking down because I was still uncomfortable. I felt really nervous and didn’t want to speak. When I did, I was very soft spoken.

We had our own private room, so waitresses came in and out delivering all sorts of food. They brought salad, salmon with mustard (which tasted spectacular), salmon wrapped in radish, Japshae noodles, seaweed, tea, soup, pine tree porridge, a meet patty with bell peppers, and more I can’t remember. Most of the things I tried were really delicious, but everyone around me kept telling me to try more. My mentor even started to place things on my plate. I was too full to eat more but they kept urging me to eat. (At one point, they switched my chopsticks because they thought I was struggling to pick up my food). The most disappointing thing they told me, however, was that everything we had just eaten were only appetizers.

I felt unbearably uncomfortable and kept eyes down most of the time. I was the only one in the room who didn’t’ speak Korean, so I really didn’t have anything I wanted to say. Don’t get me wrong. I felt so bad for how I was acting and desperately wanted to leave. Just the thought of having to have lunch with them every Wednesday doesn’t exactly bring the best feelings.

And then they asked me about my trip to Japan. I told them the trip was OK, so they asked if there was more good than bad.

When I started telling them about my host family and the trouble I had with them, I started crying. The tears would not stop! My professor apologized for asking because she didn’t think it would hurt that much to talk about it. I really didn’t want to speak after that, but I did my best to laugh it off. It was at that time the waitresses came back to bring us all rice, spicy soup, and plum tea (which was very sweet).

After I dried my tears, then Professor Park asked me for suggestions on what she should speak about to all of us Purdue students. Every Wednesday, we are supposed to have a guest speaker talk to us, so she wanted to speak on something that would grab our interest. I couldn’t suggest anything because I don’t know what she should speak on. So I wasn’t very much help to her. But after that, we all said our goodbyes. (Before she left, my mentor said I was unable to use the gym sense I wasn’t a student). My work day was basically over, but I decided to work a little more anyway.

Back in the office, I decided to bring my laptop to Professor Lee so he could install some Adobe programs on there. I was very intimidated by him, but we got to talking about my family, where I was from, my hair, and Korean and Japanese culture. It was really easy to joke with him! I’m really glad that I had that conversation with him. It completely changed my perspective.

After uploading one blog, I left work and went exploring around my hotel. I ending up finding a gym, so I went and got a tour of it. The membership fee was outrageous, though, so I left. As I was walking back, some guy on a motor bike with a kid on the back seat stopped in the middle of the street and waved to me like her knew me. At first, I thought he was pointing and waving at someone else, but he smiled real friendly, so I waved back and said hi.

As I mentioned earlier, everyone in the program has to attend a class every Wednesday. Also on those days, one of our 4 groups is in charge of buying dinner. I’m in group one, so my group was in charge for today. I was already in a sour mood from the day, so I was very irritated when we started getting the food 45 minutes before class started. Being late to the lunch was one thing, but being late to class will cause us to lose points. It all worked out in the end when we settled on ordering pizza.

In class, our guest speaker was a famous Korean glass artist named Yang Yu Wan. Her work has been and magazines and displayed in various countries. She’s also one of my professor’s friends, so it was really nice to meet her.

After explaining her career, she had each of us paint a picture on a glass cup. She is going to heat it for us and bring it back so we can take it back to our countries. 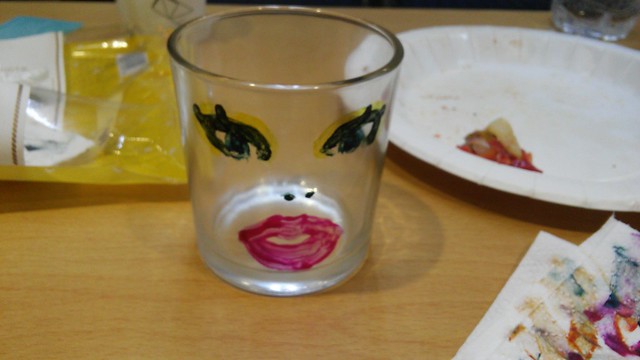 To end the day, I decided to go out with everyone to Myeongdong. They originally went out to drink, but everyone got separated, so we just toured the place. There was a really nice tea shop I found that I want to return to because the tea smelled so sweet. Too bad I’m not a tea drinker.