I’m still exploring in a lot of ways. I don’t know myself completely.

I wasn’t supposed to be at work until eleven today, so I didn’t know what to do with myself. I decided to get up early to explore Ewha’s campus for a few hours. (I tried to videotape my commute there, but the video was too shaky). There is a garden on top of the main attraction, so I took a stroll through it. The architecture is truly amazing and way better seen in person. I ended up getting shin splints on my right leg from walking up all the steps and steep hills, though. At least I got my work out for the day. 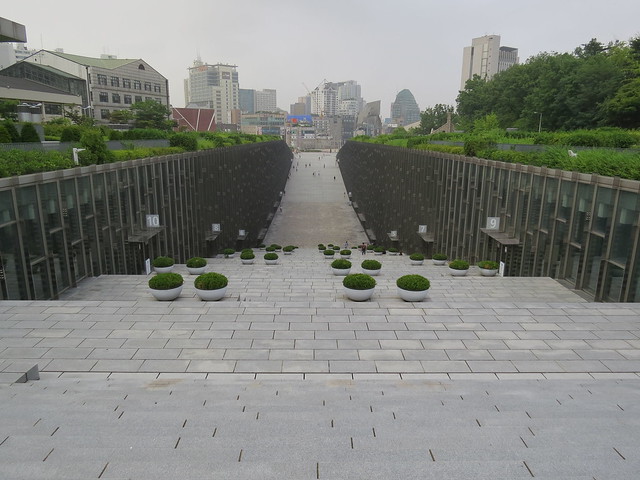 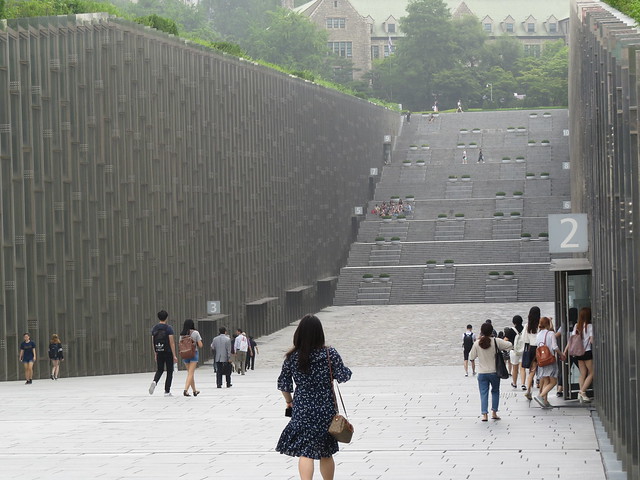 Speaking of which, I went to the ECC Fitness Center to see if I could use their gym in the future, but they said I would need a student ID card. I’m going to check with my boss tomorrow to see if she says the same. If she does, I think I’ll be very disappointed. On the bright side, I can run on their track, hopefully.

At lunchtime, I went to Ewha street with Kristene, and we ate at a Vietnamese restaurant called 63 Prov. The building/room was so small, along with the tables and seats. It was like sitting at a child’s play table. 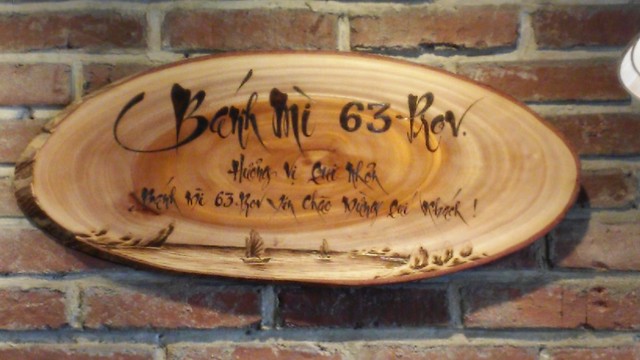 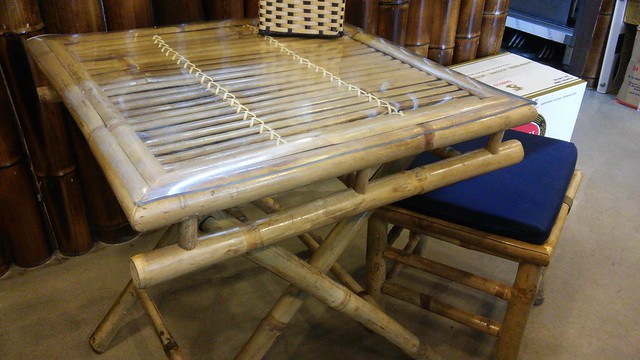 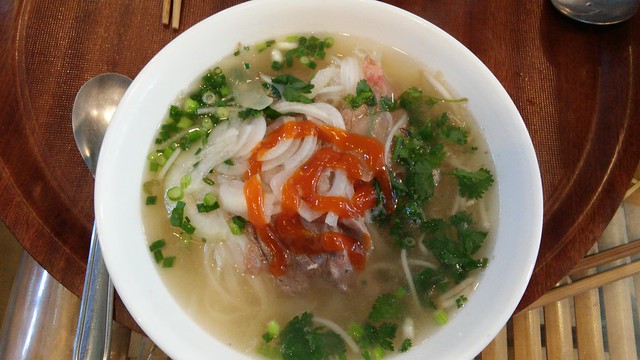 When we returned, my mentor checked in on us. Kristene and I gave her links to our websites so she could keep track of our work. After, two Ewha students came in to have us help them practice their English. We did introductions, talked about hobbies, top artist, and movies. Somehow, the topic of pollution came up. One of the students told me that pollution here was one of the top issues and that 50 percent of the pollution was coming from China due to their factories. Then, we talked about how Koreans are obsessed with appearances. The students said that they felt pressured to fit a certain image only because appearance was stressed so much. Good looking people were portrayed in media so much, that foreigners are surprised by how ugly Korean men are. (Their words, not mine). They also do so much schoolwork that they don’t have time to have hobbies or even do sports, so they drink a lot.

“Is there anything good about South Korea?” one of the students said with a little chuckled.

This made me feel a little bad only because of the ignorance a lot of people have on another culture simply because they analyze it based on media. A lot of Koreans think Americans are rich people who also do drugs and have sex with everything, and Americans think Koreans are pretty people who love to sing and dance all the time. All of it is just so fake (to a certain degree of course).

When Kristene leaves, I don’t know what I’ll do because I don’t talk much. I hope I can help them practice their English.

Once work was over, I decided to get out and go to Itaewon with a group of friends. It was dark out when we went, but the place was still very lively. We explored the place, and I admired all of the graffiti and sculptured artwork. There was a lot of street art actually, so as we toured, I searched for more to snap a few photos. 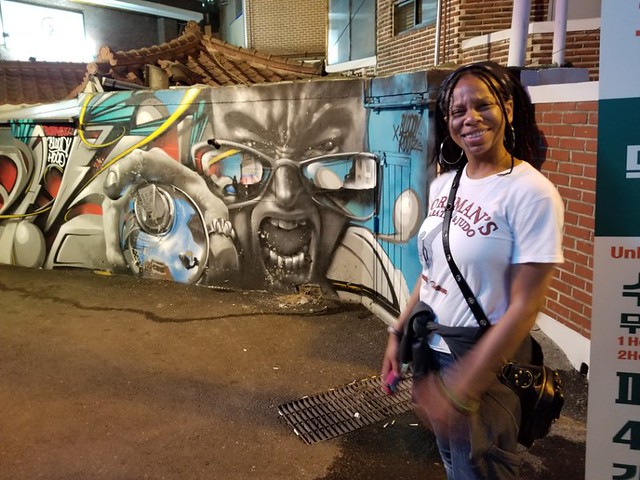 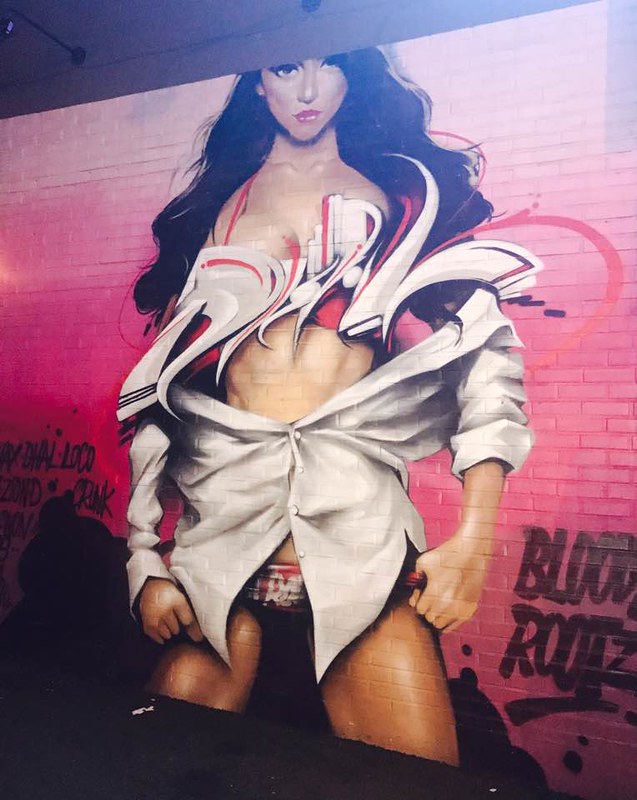 There was also a huge LINE store, but we decided to skip it since we saw two of them within two days. (Apparently there’s a place called Hooker Hill here. Trust me. It’s exactly what it sounds like). 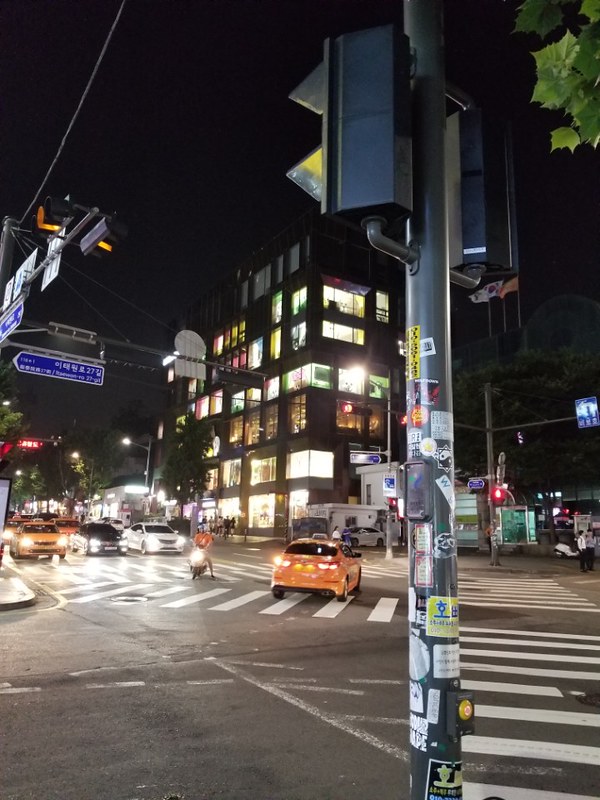 And I won’t lie. As soon as we exited the subway, I immediately saw a bunch a black people hanging around bars and clubs. I saw most of them hanging around some place called Compton XD. Go figure. Other than that, there were a lot of foreigners. According to Kristene, a lot of people, even the shop workers, know English.

It was a good day overall. I really want to learn to loosen up and become confident in what I do. I also want to get to know my peers a lot more. I only say this because throughout the day, I feel like I wasn’t the best person I could be. Hopefully, tomorrow will be different.