The worst thing about being a tourist is having other tourists recognize you as a tourist.

You wouldn’t think a hotel key card would make me excited when waking up, but it did. I was really fascinated with these hotel cards because they control the electricity to the room. There is a slot that you insert your key card into near the door, and that activates the electricity for the room. When you remove it, everything turns off, including the AC and electronic toilet. It’s good for helping me remember to take my card when I leave and saves electricity, but sometimes, I just want my room to stay cold. 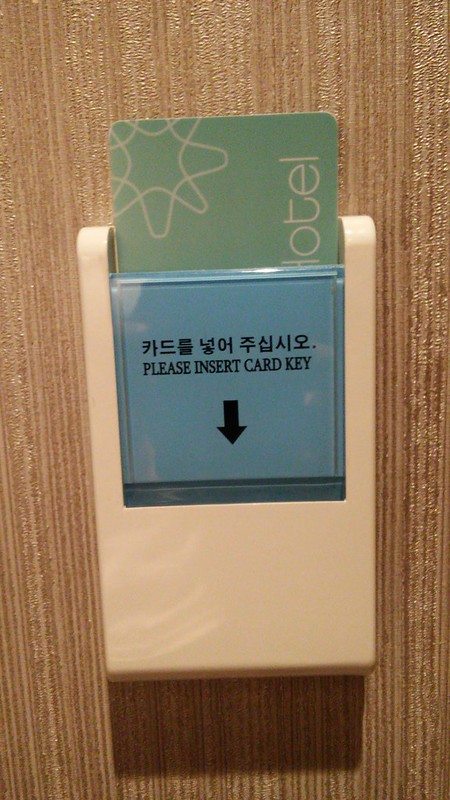 During our small orientation on Day 1, everyone received 8 tickets for a free breakfast at the hotel restaurant. Today, I used one to eat with my roommates. It was buffet style, and the food was really good. There was fried rice, dumplings, boiled eggs, little sausages, and much more. 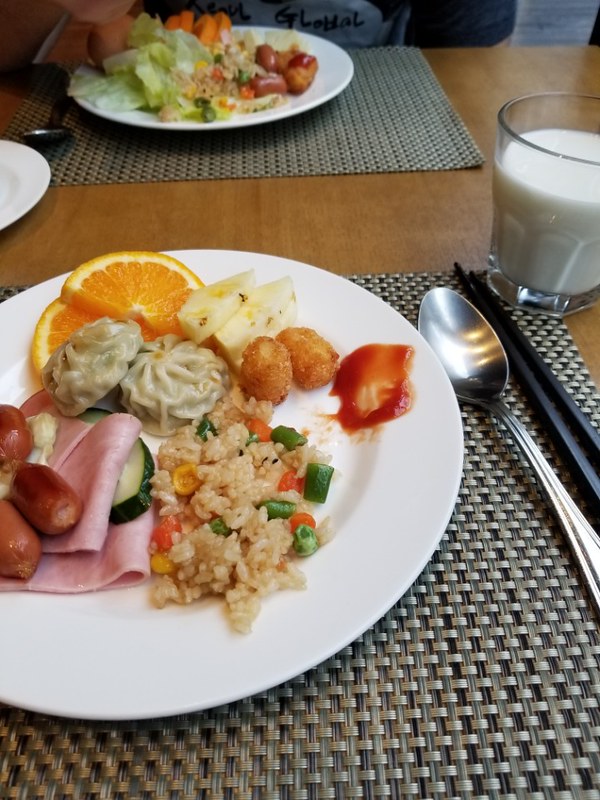 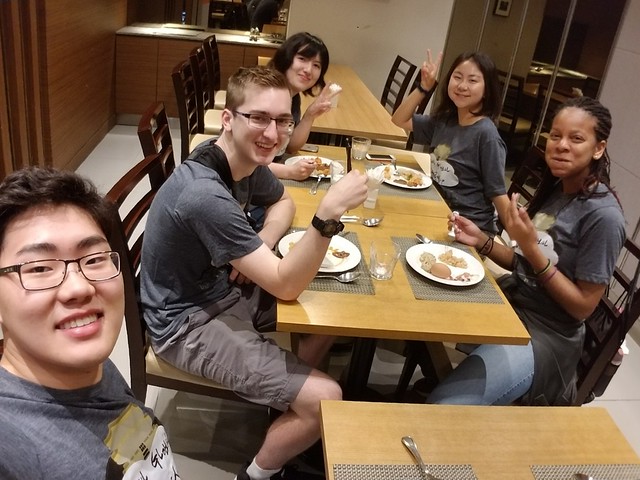 But enough rambling! Today, I rustled up the cameras and packed my hiking shoes because this was the day we toured the city of Seoul. There were supposed to be scattered thunderstorms, so it was cloudy all day (though, sometimes you can’t distinguish clouds from pollution). Luckily, the forecast was wrong, and we could continue with our tour. It did still rain from time to time.

At 10:20, we all met up to start the Seoul tour. A guest jointed us on this trip, too. She was the daughter of the CEO half the group would be working with. Some of the guys were nervous and thought they had to impress her because of that. But I got to chatting with her easily. She’s awesome!

Anyway, the first thing we did on the tour was hop on a charter bus and head to a hanbok rental shop. A hanbok is a traditional Korean dress know for vibrant colors and simple lines without pockets. For the girls, you had to choose a skirt we really liked, and the workers picked a top to match. Then, we put on underskirts that had thin wire in it to help the dress stick out. The workers pinned up the skirt and tired the top together for me. I don’t like dresses, but that hanbok was absolutely gorgeous. 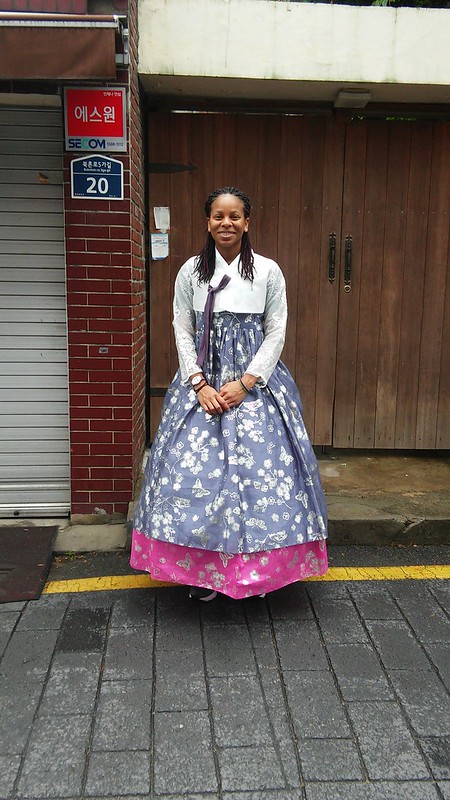 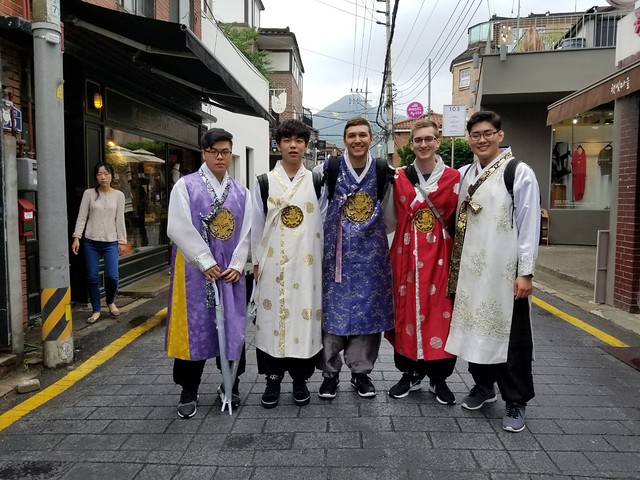 What was funny about wearing hanbok were the random picture taking. As soon as we left the rental shop to take pictures of ourselves, random strangers – the locals – came up to us wanting pictures. (This happened about six times). One guy literally stopped in front of my friends without asking and snapped a photo of her. I felt like we were the attractions while wearing these outfits. However, we wore hanbok not only to experience Korean tradition but also to get into our next touring spot for free.

With our fancy clothes, we went to the Changdeokgung Palace to have a tour. (We also seemed like the attraction here too. I mean come on; we were a bunch of foreigners with our phones out. Why wouldn’t we get stares?). The palace is one of the “Five Grand Palaces” built by the kings of the Joseon Dynasty. This place was massive. Something I noticed that was different from Japanese shrines and palaces was that this Korean place was more colorful. There were even guards in the front. We were not supposed to touch them, though. I think you can get beat up if you do. 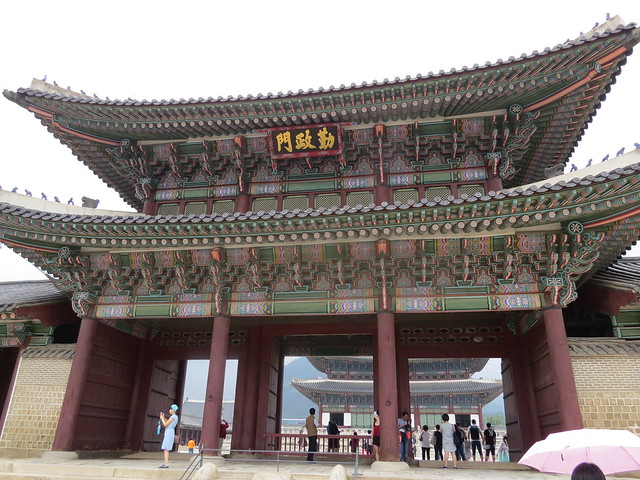 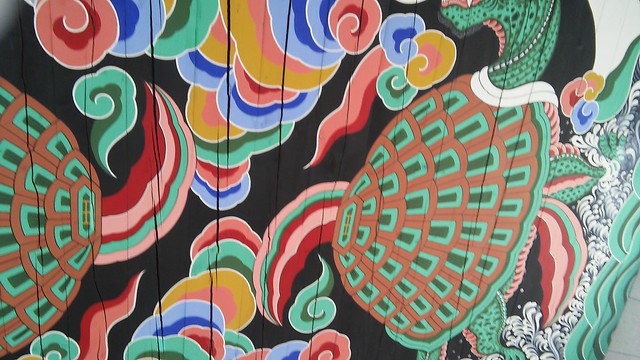 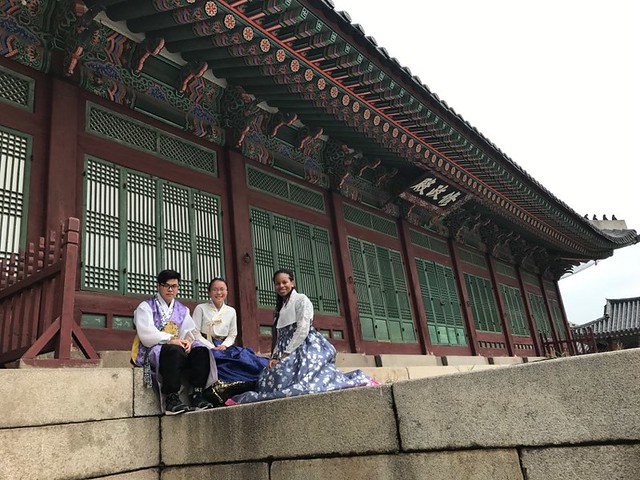 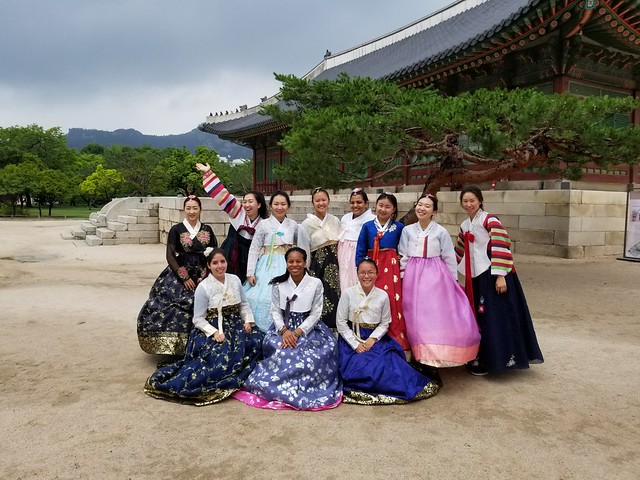 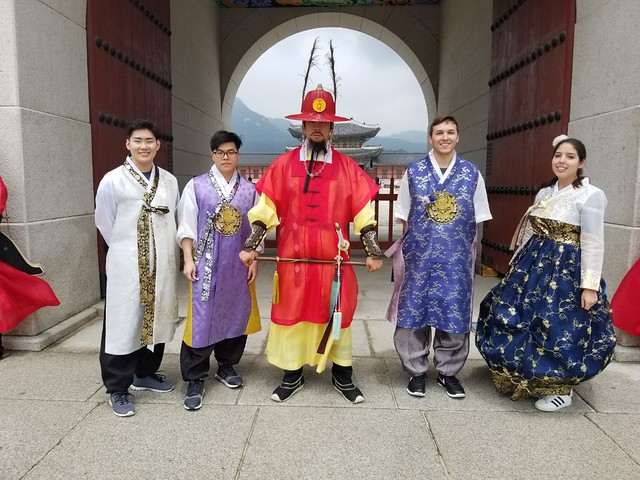 It was really hot out, especially with us in our hanbok, but only because we wore our jeans and shirt under it. Nonetheless, we were all happy to take the outfits off on the bus before returning it to the rental shop.

We headed to Namsan Park after to go into Seoul Tower. This area was very hilly, but I guess that’s to be expected when you’re on a mountain. It’s still fun to walk up and down the hill, though, at least for me. So, after burning off some calories, we dined at a buffet called N Seoul Tower. While eating, I saw a couple dressed up similarly. Apparently, this is common for some couples to do in Korea. Anyway, after having out fill, we went to the top of the tower to take photos, but since it rained, we couldn’t see anything but mist. I was still happy, though, because I got some candy from the Weeny Beeny candy store. 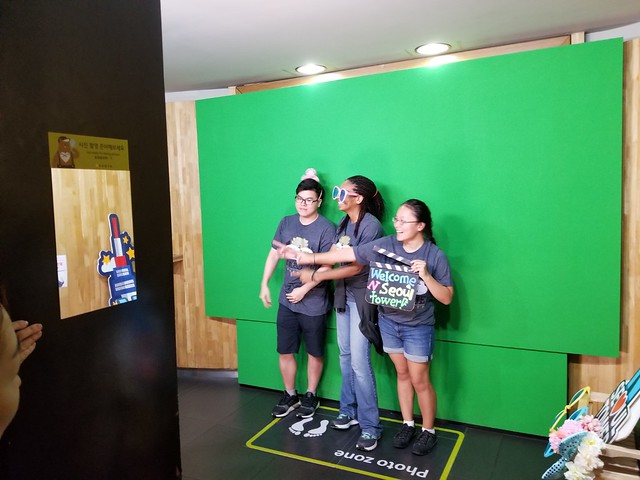 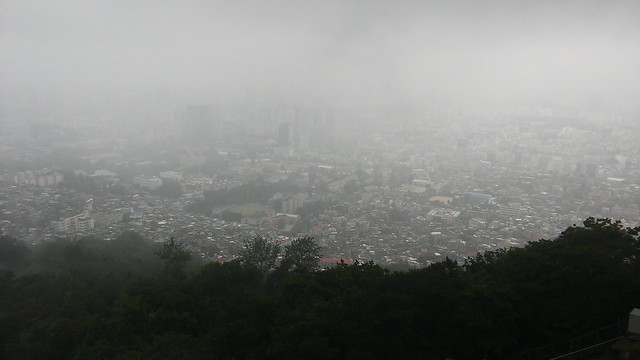 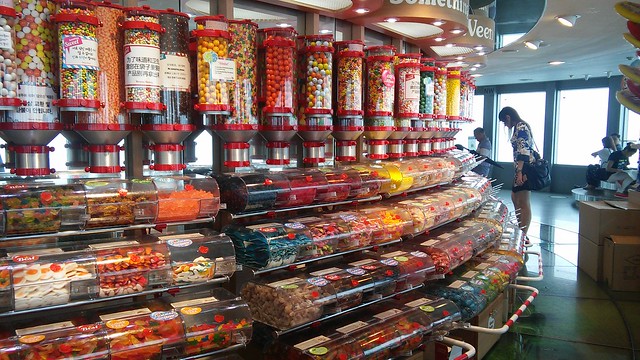 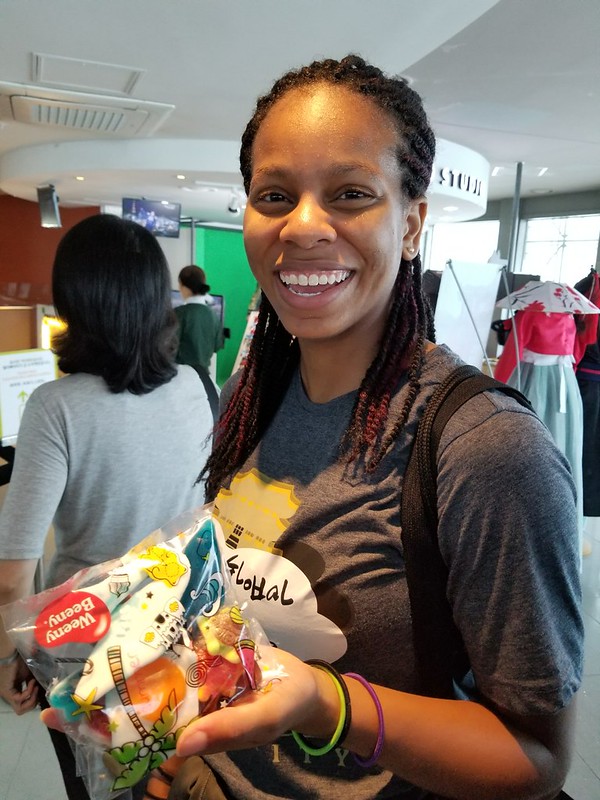 We didn’t really do too much after. For an hour, we went to a large store called Lotte Mart to shop for anything we needed for the month. It was a large place that sold groceries, daily essentials, fashion items, etc. There were some aggressive sales women who kept trying to pull me and a few other people to the side to buy something. One of my friends was really really shocked because they were handing out free samples of Heineken. Let’s just say he was happy to hear about that. 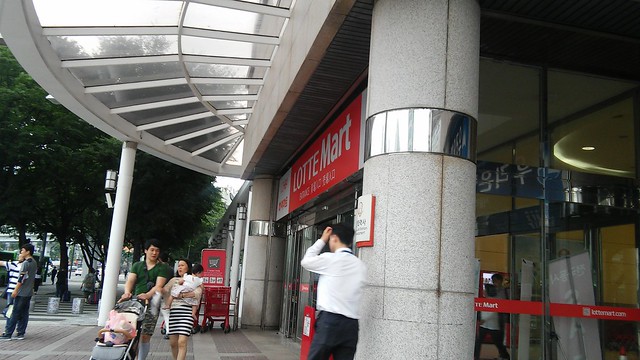 After, we went to the Dongdaemun Design Plaze (DDP). It’s a major urban development landmark in Seoul designed by Zaha Hadid and Samoo. I was so fascinated with this place because I have never seen architecture like it. It is literally a large silver abstraction. Absolutely stunning! This was the last stop of our tour, however. For thirty minutes, we all had time to go around and explore before returning back to the hotel. 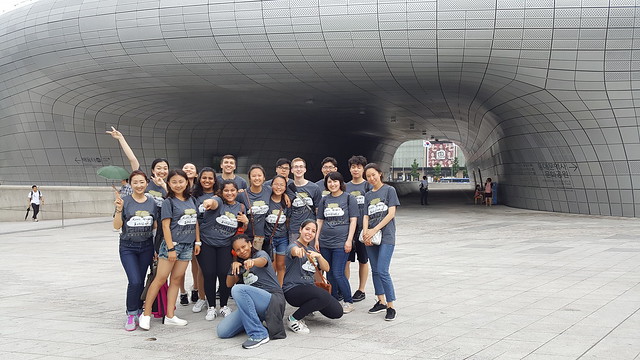 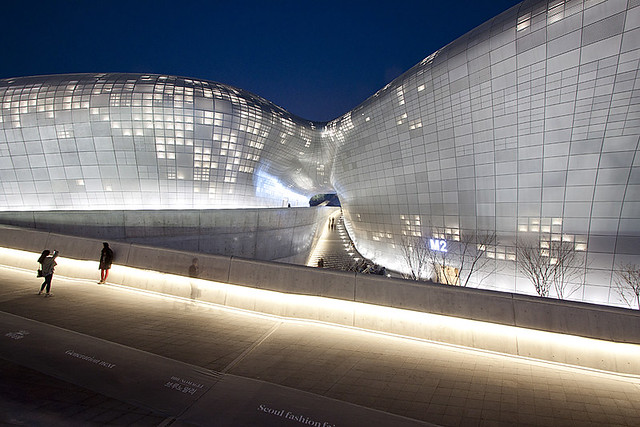 We ended the day with some dinner close to Cheonggyecheon Stream. The food is called Ddakgalbi, and it’s really spicy, but I chose to torture myself a little bit sense it was so good.

The day was a grand one. I’m really grateful I was able to tour around and get to know my peers more. We laughed so much today, and that just makes me really happy. I’m excited for tomorrow now because that’s when things really get started. Tomorrow, I start my first day as an intern.