This field is about self-improvement constantly.

If you don’t know, I attend Purdue University, and I major in Creative Writing and Studio Arts & Technology. I live on campus, so I often keep a look out for interesting flyers. I stumbled upon a Study Abroad Fair flyer, one day, and decided to take a look. There was a specific study I had in mind, so I asked faculty if there was trip around that. They didn’t know, so they sent me to another faculty member across the room. I ended up passing a table that said “Annual Global Internship in Seoul” as i crossed. At the time, I didn’t think much about it and simply asked the other faculty my question, which they didn’t have the answer to. As an apology, they gave me a pamphlet for their study abroad trip.

Later, I ended up going to the callout dated in the pamphlet and was interested as soon as they said I could intern in writing. Before I knew it, I filled out an application, did an interview, and was accepted. I applied to three companies: Ewha Womans University (journalism), SWNA (graphic design), and Design Mall (architecture). A month or so later, I found out I would be interning at Ewha Woman’s University (Hangul: 이화여자대학교) in the media department.

I applied for a few scholarships when I found out and won the Gilman International Scholarship. In fact, at my scholarship banquet, I was told that I was the first freshman to get it and was given a small gift for my accomplishment. In exchange for the scholarship, however, I have to do a project I proposed, which includes this blog and comics that I will soon have up. But more on that in a later post.

I’ll be taking thee classes for two weeks in preparation for this trip: Korean Popular Culture, Global Society, Food, and Culture, and International Internship. A summer task I have from the professor hosting this is to 1.) know how to commute to my company and 2.) know the history of it. i know for a fact that I’ll be staying at a hotel about 30 minutes from the university by train. As for the history:

Ewha Woman’s University was the first modern educational institute for Korean women. It is a private women’s university located in Seoul, South Korea, founded by the American Methodist Episcopal Church. The university traces back to American missionary Mary F. Scranton’s (who began classes for women at her home in Jeong-dong, Seoul) Ewha Haktang mission school for girls, which opened with one student on May 31, 1886. The early founders decided to use “Woman” instead of “Women” because they thought every woman should be respected. The universities (English) motto is “Knowledge (진), Goodness (선), and Beauty (미).” “The school started proving college courses in 1910 and professional courses for women in 1925” (Ewha). After Korea’s liberation on August 15, 1945, Ewha (which means Pear Blossom) was granted government permission to become a university, thus was the first South Korean university to be officially organized.

(I really love the architectural design of Ewha!So beautiful!) 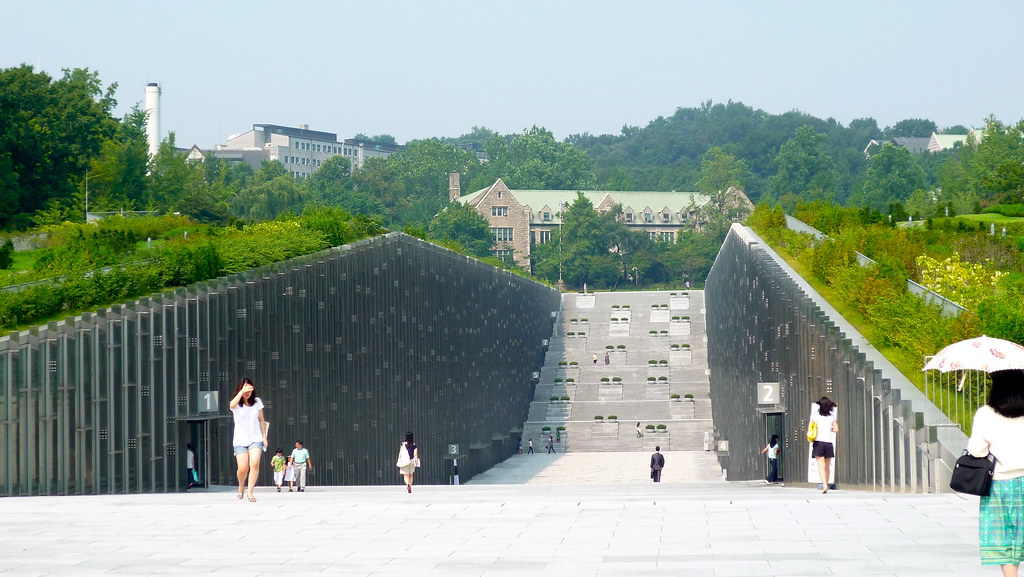 I’m really excited for this internship; though, I’m not really sure what to expect. All I know is that I will have one other student working at the company with me. (All the other students will be off to their own companies). The thing I’m nervous about, however, is how I’m going to get to the hotel when my plane lands. But I guess I’ll figure that out when I get there.

(Other image sources are hyperlinked to the images)