In Japan, the official name for a Japanese New Year is Shougatsu (正月), and it is celebrated more than Christmas. It is one of the biggest and most important holidays here, so businesses and shops are shut down between January 1 and January 3 because New Years is celebrated for 3 to 4 days – through December 31 and January 3.  There is a great amount of preparation that goes into this holiday, but why not? It’s the time for a fresh start and for wonderful opportunities.

One main tradition in Japan is to send out postcards to all family and friends for the New Year. It’s like sending Christmas cards, but instead it’s called New Year’s post cards (年賀状nengajō). These cards where originally used to tell people who often didn’t see each other that they were alive and well. However, if a person in the family has died, other family and friends will not send them post cards out of respect for the dead.

The years here are represented by the Chinese zodiac, which has a cycle of twelve years. This year, 2016, is known as the 28th year, the year of the monkey. (In order, the zodiac animals are the: rat, ox, tiger, rabbit, dragon, snake, horse, goat, monkey, rooster, dog, and pig. Last year, the 27th year, was the year of the ram or goat). When the year is written like this, it is known as the “heisei” year, and it is written as such: 平成28年. (You can see a chart here: http://www.joewein.de/heisei.htm).

Normally in December, everyone in the family participates, spending a lot of time handwriting addresses and mailing off postcards. Sometimes, they are written with ink brushes – calligraphy if you would. In my host family, my host mother bought pre-marked post cards, and my host brother Harumichi designed a monkey for the front of it. They made so many copies. 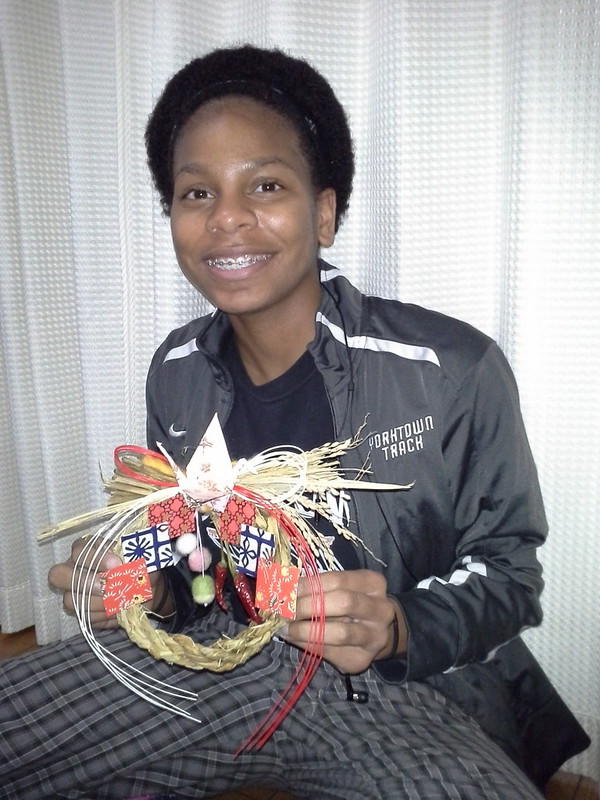 Me with the Shimekazari I made with my host mom

A shimekazari is a traditional Japanese New Year decoration made from rice straws. These immediately go up in stores and replace Christmas decorations after December 25. Though the main material remains the same, depending on the region in Japan, shimekazari designs can vary. (Here in Tokyo, shimekazari are in the shape of a circle. I made one with my host mother and decorated it with origami paper and a crane). Shimekazari are placed on the doors like a Christmas reef or on the porch (on a porch light or something similar).  Once the holidays are over, people pile their shimekazaris together and burn them.

During this special celebration, it’s time to pop out the champagne, wine, and sake and give a toast to the New Year! And along with drinking, it is common to eat buckwheat noodles called “toshikoshi soba” on New Year’s Eve. Sushi is very popular to eat now a day too. However, it is most common for families to cook a huge meal for New Years that will last them three days or until January 3rd. It’s a wide spread with a tremendous selection of dishes (fish cakes, sweet potato, soybeans, boiled seaweed, etc) called osechi-ryōri (御節料理 or お節料理). Since most of the dishes are dried, sweet, or sour, the food is kept out without refrigeration. 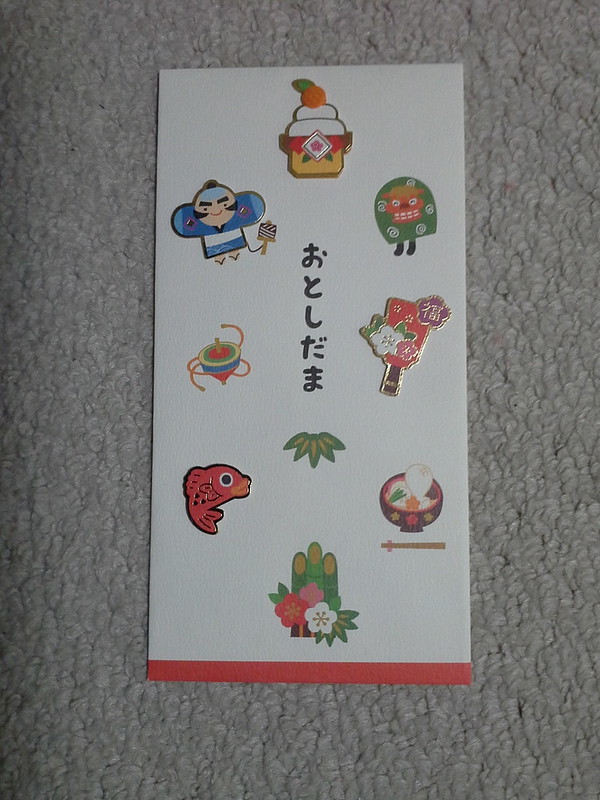 For the Japanese New Year, it is a tradition to give children money. This is known as otoshidama. They are given to children in beautifully decorated envelopes called pochibukuro, and the amount of money given depends on the age of the child. (My host family gave me 10,000 yen, about $80 to $100). However, if there are several children, the amount given is normally the same so others don’t feel better or less than another.

I am close to the largest shrine in Tokyo, Meiji Shrine, so I went with my Tokyo chapter leader and her family to the shrine. When we got there, there were so many people! One thing I noticed was that everyone, including the family I was with, returned an arrow they had gotten from the last year. (I’m guessing it is like a charm for the year). Anyway, inside the gates, we waited in a long line for fifteen to thirty minutes just to enter the shrine. And when we finally did enter, we simply packed ourselves in a thick crowd, threw coins towards the shrine, and said a prayer for the year before leaving. On our way out, the family bought another arrow for the year.

One thing that is normally done during this time is the ringing of the bells. On the midnight of the New Year, a shrine bell will be rung 108 times. It is supposed to symbolize the number of human sins (in Buddhist belief).

During the New Year, a lot of people have their TVs on because a marathon goes on all day as well as a singing show. On top of that, popular music artists form into teams and compete against one another in games like tennis or kick ball. Outside of TV, games like kite flying (takoage) and fukuwarai (where someone is blindfolded and has to places paper on certain parts of another’s face) go on around the city at department stores, malls, etc. And one major popular tradition that ends the New Years night with a bang is the huge firework show.

Well, there’s a little note about a Japanese New Year. I wish you all the best, and I hope your year is filled with much fun, great success, and opportunity!