I just sit back and observe. You learn more that way.

No matter what car I see, it always looks so shiny and new. Actually, I have seen a ton of fancy and good-looking cars! Since I have been here, I have seen at least six Lamborghinis. (Then again, I am in Tokyo.)

If you look at a Japanese car, you will immediately notice how narrow and small they can be; however, inside, they can actually be a little spacious. Sometimes. But because of the narrow streets, cars have to be narrow as well. Trucks don’t even dare come close to American trucks. Here in japan, they are probably ¼ of the size of Americans truck, and probably half as tall.

The steering wheel to a Japanese car is on the right side of the car, so as you may have guessed, they drive on the left side of the road. And as I’ve mentioned before, roads are very narrow. But even with that said, there are one-lane roads that are meant for only one car that somehow fit two. It’s like a one way street, but two cars can go both ways. However, the cars have to maneuver around one another, one moving to the right and the other to the left. It makes it more difficult when a car or even a truck decides to park on the side of the narrow road, taking up at least half of it. What makes it worse is that the narrow road is shared not only by cars but also people on bikes and people who are walking. Everyone shares the road. Try maneuvering a car through a narrow road while trying to avoid hitting pedestrians and the car parked beside you as well as the car headed your way.

However, there are some helpful things that can make life a little bit easy on the road. Things like mirrors. On mostly every corner of the street, there is a tall, orange mirror. This is so people can see if a car is coming before they even reach the curb. I think that’s a pretty neat thing because there are so many crazy drivers, at least in Tokyo. Though the roads are small and have very, very sharp turns, people drive above 40 and even 60 mph, slamming on the breaks when they are not even 50 feet from the car in front of them. (I don’t know how I’m still alive?)

The train system in Japan is dead on. If the flashing billboard says a train will arrive at 12:05, the train will be there at 12:05. They can also arrive very swiftly. There was a time that I got off at the wrong station, but another train showed up not even 2 minutes after. Train transitions move so quickly and so precisely that it’s rare for a train to be late. If a train is late, however, the conductor will go around to every single person on the train and give them a slip of paper that states the train was late and excuse him or her of her tardy.

Train stations are so brilliant and clean too! There is always a help desk for those who need assistance, and there is always an emergency button just in case someone falls onto the train tracks. Also, there are always signs that indicate where a certain exit is or what gate you need to go to for certain Line, but they can be so confusing. Trains that go to certain destinations are distinguished by color. (Each train has a line on it with a specific color.) And local maps show these by outlining a certain route with that train’s color.

In order to enter the station, you have to purchase a ticket just outside of the scanners you go through togive your ticket. However, most people use a train card called a PASMO. Not only is this used for swift entrances into and out of a station, it can also be used to purchase goods and groceries.

Most people on trains either have their headphones in, are playing on their phone, studying, reading a book, or sleeping. And normally, trains are quiet, so talking can disturb others sometimes. The quiet also helps for people who are listening to when their stop is coming close. But sometimes, beyond all the ads that dangle from the ceiling, there are little screens that show maps of upcoming destinations and stops as well as commercial ads. 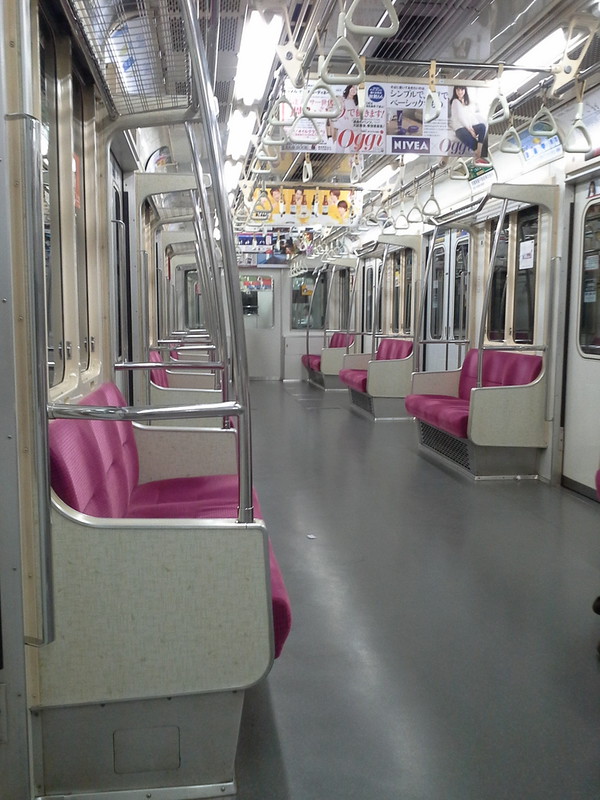 The rare moment when I am in an empty train car

On most trains, seats are placed along the walls of a train car, leaving a lot of space in the middle for others to stand. And since the train jerks a lot, there are handles that dangle from the ceiling that others can hold on to. Due to rush hour in the morning, trains have some cars that are designated only to women due to the perverts that like to grope. And sometimes during rush hour, men have to keep both hand raised or on the handles so they don’t grope anyone. And speaking of rush hour, there are men who have a job simply to stuff people into a train car when it over flows. I think that’s hilarious.

If you say バイク (baiku; bike), Japanese people will instantly think of motorcycles or motor scooters. The common word used for a regular peddle bike is自転車 (jitensha). Bikes are used much more often than driving because it is more convenient and costs less. These bikes come in all different shapes and sizes. Of course there are regular manual bikes most people have (a lot of them have baskets in the front of them), but the bikes that surprised me the most were the automatic “mother” bikes. These bikes not only have the regular cushioned seat of the rider but also a child’s seat (almost similar to a car seat) on the tail of the bike. Sometimes, there is even a seat on the nose of the bike. And as mentioned before, these are automatic bikes, which is useful when someone is climbing up a steep hill; they barely have to do any peddling.

It’s no mystery why I get stared at. What’s a mystery to me is why I get stared at in a place where most foreigners go and live. And for being in Tokyo prefecture where most foreigners go to live, I sure do get a ton of stares. Nearly every day, I go to Roppongi to school. If you didn’t know, Roppongi is the place that holds Tokyo Tower. In fact, I can see the tower every time I walk to school. Anyway, Roppongi is a place that crawls with foreigners, yet people still do a double-take when they pass by me. However, most people will just throw a quick glance my way then be off with their day. Children, however, are gods at staring. They will eye me down, trailing me with their eyes as I walk past them. (One time, there was a little girl who just came up to me while I was shopping. She just beamed and said, “Konnichiwa!” very cheerfully. I smiled back and said, “Konnichiwa!” in return. The girl suddenly started chatting with me, but I kept turning to my host mother because I had no clue what she was saying XD.)

Most of the restaurants or food stands in Japan display their menus. They have plastic food displays that look so incredibly real that if you happen to misplace it and someone found it, they would be tempted try to take a bite out of it. And the displays are so incredibly beautiful, and useful, especially to foreigners like me. 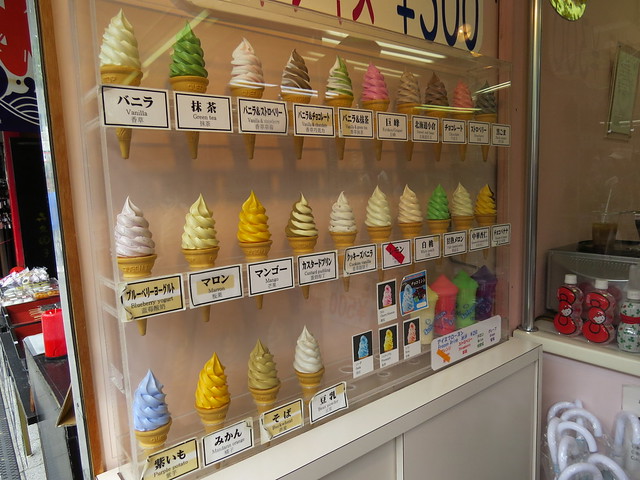 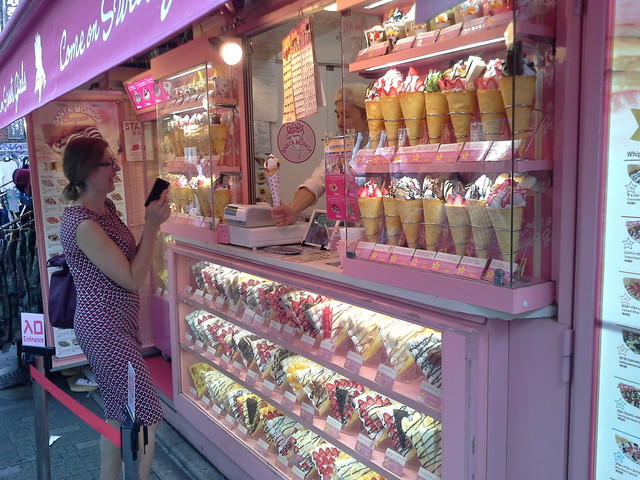 Sooooo many children stared at me for the longest time. For older people, I found out the way for them to stop staring is to stare back, but for children, they just don’t care. So, I just started waving at them, and every time I did, they would give me strange looks. So, I asked my host mother if waving to children was a bad thing in Japan. She told me that for a female, it was ok, but if it was a man, it would be strange and even creepy. After that, I simply started giving a little nod or a little bow to children, and they would bow back. That, or they would just stare at me like I had two horns sticking out of my head.

Besides the fact that children stare a lot, children can be very . . . high spirited and devilish at times.

Walking around, I see mothers, and sometimes fathers, caring around HUGE babies in baby slings. And the babies will just flop about as they walk. (There was one time when I saw a mother on a bike with a child in her pouch, a child on the back seat of the bike, and a child in the front seat. I commend her.) And a lot of times, I see children just lay on the ground for no apparent reason. They just suddenly stop and lay on the ground. But most of the time, I see children that fuss and throw attitudes. And their screams are petrifying. They deliberately disobey their parents and do their own thing, and all the parent does is tell them “Dame” or don’t do that, but the kid does it anyway. I don’t think discipline by parents in Japan is a big thing.

Every morning, I see endless seas of people with terrible posture as well as frowns on people passing by, and I mean deep frowns. People always seem tired, yet they always seem so curious. However, if spoken to, they will light up almost instantly. They will get into a little chat and say “Sugoi (awesome)” or “Kawaii” or “Yabai (oh, my god)” a lot. It amazes me. But what also amazes me is how active the elderly can be. Nearly every day without fail, I see someone running down the street or hauling a huge load of groceries. Even for those who can only move three steps every three minutes, they still find a way to get around.

Some gas stations have the pumps hanging from the ceiling and out of reach.

If you are in Japan, or at least Tokyo, you are in the perfect place to buy anything, especially online. Shipping here is crazy fast. If you buy something online, you will get it by the next day. My host mother bought me a JLPT N4 workbook, and it swiftly arrived the same day she purchased it. Talk about a speedy delivery.

Anime is not a big deal in Japan. I repeat, anime IS NOT a big deal in Japan. Though Japan is smeared with ads pertaining to different anime and have several shops dedicated to nothing but anime, it is not a big deal because it is so common in daily life. (One of my Japanese friends didn’t even know half of the anime I listed off when she asked me what my favorite anime was. She didn’t even know the difference between anime and manga! For others who don’t know, anime are the animated motion pictures [“anime” is simply the short version of “animation”] and manga are graphic novels.)