I’m not going to deny that I enjoy a good four or five hour karaoke session. But who doesn’t?

Finally! I finally get to talk about singing my lungs out. I finally get to talk about – wait for it – KARAOKE! But before anything is said about anything, karaoke is NOT pronounced as “care-i-o-ki.” Where the heck did we even get the “i” sound from an “a”? It’s not spelled “karioki!” In truth, “karaoke” is pronounced as “ka (as in car)- ra (as in Fergie’s song “La La”; yes, Japanese “r” sounds are a mixture between “l” and “r”)- oke (as in okay). Say it with me: ka-ra-o-ke. And if after that explanation you STILL didn’t get it, watch the first few minutes of this video for the correct pronunciation:

On September 5, I think, I met one of Yuchi’s friends, Risa. It didn’t take long AT ALL to figure out that she was obsessed – and I mean OBSESSED – with Ariana Grande. She started showing me the background of her phone – which had Ariana on it – and YouTube videos, asking if I knew Ariana Grande. She even asked me if she was popular in America . . . Well, besides the fact that she IS American and was known across the sea, I would say she is pretty popular in America. But with all that said, Risa was a really quiet girl, but she would talk to me IN ENGLISH! Yes, she knew English. In fact, she lived in the states for a little bit.

And I met her father (I assume). I think he thought I was being rude though because I didn’t say much, aaaannd also because Yoshi-san told me to practice my Japanese introduction on him. Since I was put on the spot, I did the introduction nonchalantly. And after my Japanese introduction, Risa’s father turned it on me and introduced me to himself in nearly perfect English. I know they say not all Japanese know English, but everyone I’ve met so far knows freakin’ English! But that’s why I was quiet in the first place; I didn’t want to speak that much English, but in the end, I gave in, at least for that day.

Anyway, after sitting down and suddenly being served tea and sweets I didn’t ask for (when there are guests, Japanese people will sometimes serve tea and sweets or something similar, even if you didn’t ask for it), I had a brief conversation with him, I found out he had lived in America until 2003, then came back to Tokyo. He had also been to San Francisco and Chicago. No wonder he was so good at English.

In the karaoke building, I was so excited; however, are singing time was limited. Entering our reserved room, I immediately noticed how small it was, but there were only three of us, so it made sense. In order to begin our “rapturous” singing, we had to use a touch screen that listed songs we wanted to sing. I was so glad it had an English setting on it. So glad. Risa was the first to go, and of course, she sang a song by Ariana Grande (she did this about five times actually).

With not even the first song completed, we started having sound troubles, and by sound troubles, I mean the music was really, really LOUD. What made it worse was that the stereo the music was coming from was at an impossible height on a high shelf in our karaoke room. Luckily, brave Yuchi, climbed on the table with her short self and cut it down, but only a little bit. Then, the singing went on. 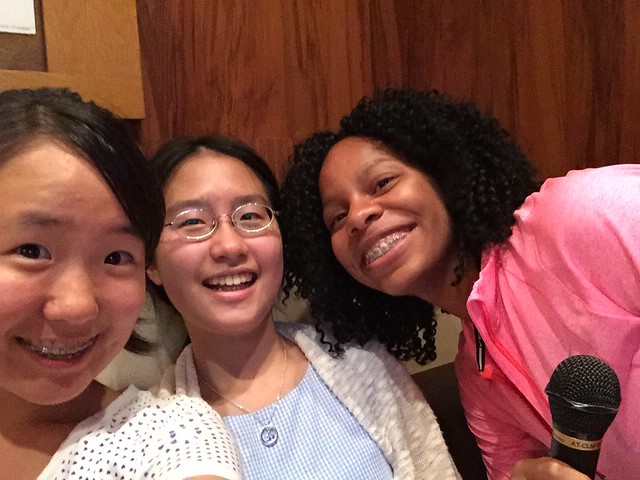 Yuchi, Risa, and I

After I sang a song or two, I went out of the room to get free drinks. However, after looking all over the counter, I had no clue where the cups were. So, I did the next best thing; I asked to two native Japanese speakers next to me. Actually, all I said was “Sumimasen (Excuse me). Cups?” The two gentlemen immediately beamed. “Oh! Oh! Oh!” they said. They took me over to the counter and took out a drawer that had cups in it. But they didn’t stop there. They were laughing and smiling the whole time along with me. They started walking me through steps, pointing and saying a word everything they did. It went something like this:

By this point, I was just smiling from ear to ear. I took a cup and pointed to the Lime Fanta picture, but I didn’t know how to get the drink out. So, the guys just turned pack to the machine and pointed to a button, saying “Push!” They pressed if for me, and fascinatingly, I said, “Ahhh!”

And they. Just. BEEMED! They giggled – yes, giggled – to one another, and said “So cuuuuuute!” to me. I simply smiled and said, “Arigatougozaimasu! (Thank you very much).” Bowing, the two guys waved as they walked about, still muttering, “So cute.” I just shook my head, still smiling, before going back into the room to get back to the party!

We had such a great time in karaoke! We weren’t civilized people sitting and singing like the proper girls we were. NO! We were jumping up on the table, dancing on the cushioned benches, and laughing so much! I laughed so much that the bands on my braces popped out! And when I sang a song called “Dango Daikazoku (Dango Family),” a Japanese song that is basically talking about a Happy Dango (like a circular dumpling) Family, Yuchi and Risa just laughed at me the entire time I was singing it! They said the song made no sense! Why was it talking about a happy family of food?! I then explained to them that they would understand if they watched Clannad, an anime the song came from. They never heard the anime before in their entire lives! (Back home, I showed them the video):

After attempting to sing three Japanese songs, turning down the AC (yes, you can control the AC in your karaoke room), and singing our guts out, we finally received a call from the front desk telling us that our time was up. So, after paying the lady at the front desk, we left. It’s funny too, because I saw the same two guys that helped me with my drinks outside, and again, after asking Yuchi to take a picture of them and their large group of friends, they called me cute.

Filling great from singing our guts out, Yuchi decided that we should look around the local stores. But quickly after looking through “cute” shops and other things, Yuchi and Risa found out that I didn’t like shopping much. So, we did the next best thing: we went to ANOTHER karaoke joint. 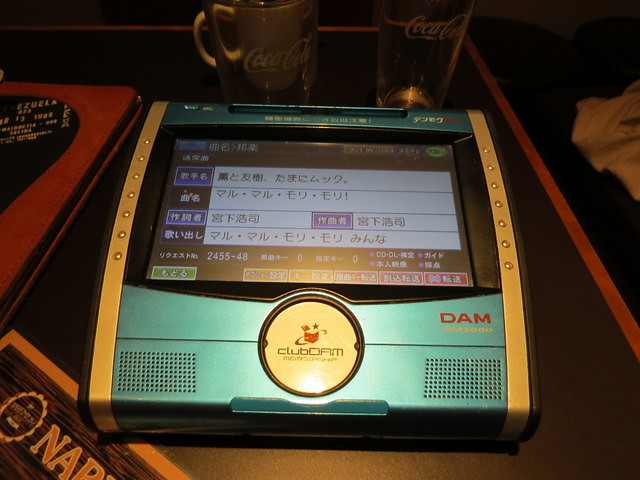 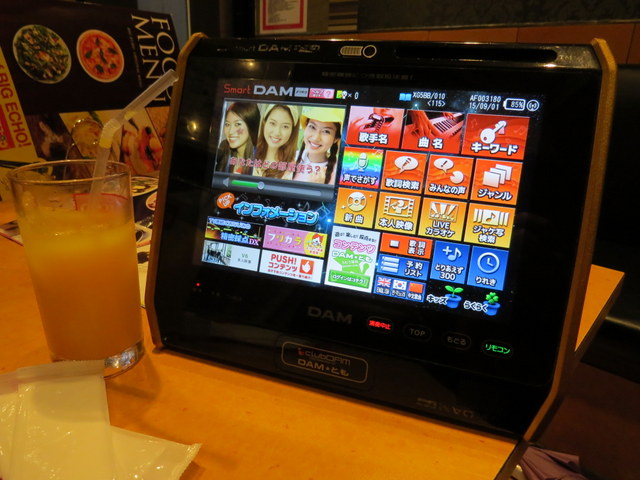 Nothing much was different in our karaoke room besides the fact that we got lost trying to find it, that we had to PAY for our drinks, and that the sound system was better. And so was the touch screen. However, the funniest time we had was when Risa and I attempted to sing “Firework” by Katy Perry. Oh. My. God. Trying to hit those high notes, we both threw out our voices. I mean we came out so strong and ended so raspy. It was hilarious! What made it even funnier was how we sang Taylor Swift’s “Shake It Off” afterwards. Our voices were so dry and raspy! XD Nonetheless, after a few more songs, we got another call, telling us we only had ten minutes left to sing. After finishing “Do you want to Build a Snow Man,” we left.

After karaoke for the second time, we went to a movie rental store. There, Yuchi kept showing me a bunch of interesting films, asking me if I wanted to watch it. Nearly every film she showed me, I told her I had seen it, and I had: “Spirited Away,” “The Girl Who Leapt Through Time,” “Graveyard of the Fireflies,” and so much more. These were all Japanese movies too. She asked me how I knew all of those films, and I just told her that I had a family that loved anime, and Hayao Miyazaki, the guy that made “Spirited Away,” “Howl’s Moving Castle,” “Lamputa (or Castle in the Sky),” and so on.

Finally, after hassling me to pic a movie, I decided to pick the “Avengers” because it made a reference to the “Avengers: Age of Ultron” shirt I wore at night. (Harumichi, my host brother, said it reminded him of “Star Wars.”) But most importantly, I chose that movie because, to my utter surprise, they had no FREAKIN’ clue what the “Avengers” – or ANY Marvel film for that matter – was.

With the sun down, my host family, Risa, and I went to a Chinese Restaurant, where they had made sure to reserve spots for us all. I ordered the basic ramen, but it had so many vegetables in it that I tried and didn’t like that I nearly left half of the bowl filled. (This is basically the time when Reiko-san found out I didn’t like a lot of vegetables.) 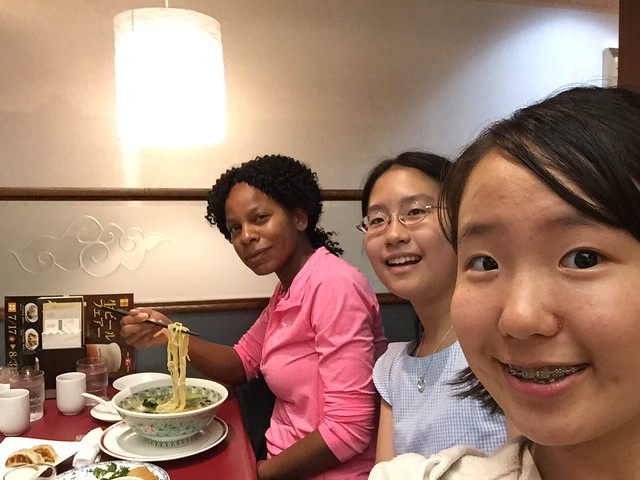 Finally, with our tummies filled, we went back home to watch the Avengers! Since the Yamamoto’s don’t have a TV in their home, we watched it from a huge desktop screen, which was connected to a laptop. And during the beginning of the film, Reiko-san kept asking me, “Can Harumichi watch it? Can Harumichi watch it?” I said sure, if she didn’t mind cool action moves, having eyes plucked out, killing – “Killing?!” Basically, Reiko-san was on alert the entire time, on the edge of her seat just in case she had to cover Harumichi’s eyes.

In the movie, there was a scene when Black Widow was being “tortured,” and her torturers had tightly grabbed her jaw, opening her mouth. Reiko-san IMMEDIATELY put Harumichi in between her legs, shielding him from the “horrible” sight. I reassured her that nothing bad was going to happen, but she still kept Harumichi tightly between her legs. Finally, when she realized that I was correct, she released him. She, along with Yuchi, were actually amazed when they saw Black Widow kicking the bad guys’ butts. “Kakkoii (Cool),” they would say in awe.

Nonetheless, there came a scene when Loki would use some strange device to take out a one guy’s eye. After warning Reiko-san of this, she immediately grabbed Harumichi, sputtering, “No! No! No!” as they left the room to never return. I thought it was hilarious. But in the end, everyone liked the movie, and that’s all that mattered. I even gave them a few tips: 1) you know you are watching a Marvel film when you see a huge “Marvel” logo flash before or during the film, 2) you will almost always see Stan Lee, the creator of Marvel, in Marvel movies, and 3) Always, ALWAYS, stay for the first and second credits. (Those are my closing tips to you guys as well).