I’m blessed with curly hair. Thank you humidity, I always wanted to be the lion king . . . said no one ever. 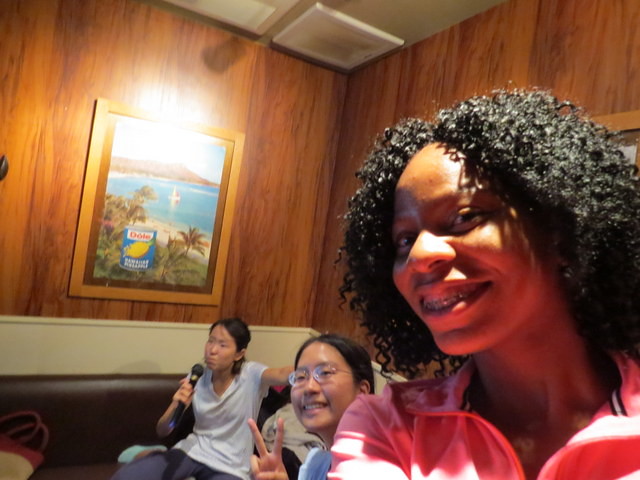 Isn’t this hair style just so cute? So elegant and sloppily perfect?! Well . . . it’s a lie. This is not my natural hair, which surprises a lot of people – especially people who don’t happen to be black. So, imagine my host family’s surprise when they finally realized that this was not my real hair? But let’s back up a bit.

Back in America, I go to a predominantly all white school. So, it is so funny – and I mean funny – when I miraculously return from the weekend with longer hair. And then, months later, I’ll return with short hair. “Oh my God, A’Dreana! Your hair got so long!” or “Did you cut your hair?” my oblivious friends would ask. And I’d just nod. (Trims count don’t they?) Also, my friends always express their envy of my hair because “I can do anything with it.” How one put it, I always come back with a new and unique hairstyle. And people keep TOUCHING it, with or without permission! And I cackle to myself when they do because they are not even touching MY hair! (Unless you are the person who negotiates and claims that me buying the hair makes me the owner of it, which, in conclusion, makes it my hair).

What also surprises people is that I (in fact most black women) do not wash my hair every day. Why? Because one, it is a lot of work, and two, it could damage or dry out the hair. Some think it is really disgusting. Well let me tell you something, try having a thick head of natural hair like me, wash it every day until it frizzes up into an afro, condition it for an hour or so before rinsing, then blow dry it for a good 30 minutes to an hour, and then put it up into a style. If you started all this at 9 in the morning, you’d be done at around 9 at night or later. (Just my experience).

And what also scares people is that after combing it for the first time after 2 to 3 months of it being in braids or something similar, my hair is everywhere, and I mean everywhere. It covers more ground than a dog’s shedding fur. Also, when I comb, my hair comes out in chunks. I mean hairy, orange-sized chunks like I’m going bald, but that’s only because I’ve combed out 2 to 3 months’ worth of hair that had fallen out while still in braids.

So, why am I telling you all of this on a Study Abroad blog? Well, imagine my host family’s surprise when they discovered all of said things about my hair.

Not even three days into my living with them, I told them I needed to find a hair shop so I could get oils and grease my hair. Reiko-san, my host mother, had no clue what I was talking about and told me to wait two months to buy oils for my hair. TWO MONTHS! That is more than enough time for my hair to wither up and dry (not die). My hair and scalp cannot last that long. What also made it more confusing is that she never heard the phrase “grease hair” or “grease scalp.” (She gave me a very twisted expression when I told her I needed oil for my hair XD).

When I was at Harumichi’s track event today (September 13, 2015), Reiko-san and I saw a ハーフ(haafu), or mixed (mostly someone mixed with Japanese), Japanese-(African-)American girl. So, she asked the girl’s mother if she knew where to find a shop for me and “my” hair. She was looking for a shop specifically for curls. That’s when I told her that the curls she saw were not real. (For some reason, that made her ask what my hair was called. I simply told her my hair didn’t have a name. What she saw were simply curls or curly hair.) She nodded, but stared at me blankly. So, I lifted my hair and showed her how the fake hair was knotted or tied to my real hair. Then I explained that I would have to take it down and do something else to it, which only made her ask me why I didn’t like my hairstyle. I told her that I DID like it, but it wouldn’t last forever because it WASN’T my REAL hair. She nodded, still not understanding. So, I proceeded to give her a long explanation of what crocheting hair was. Somehow, she came to the conclusion that she was not looking at curls. Instead, she was looking at “dreads” . . .

“No,” I simply said, trying to hold back a chuckle. And what happened next, sent us both into a frenzy. I don’t know if any of you know this, but a Japanese and an American “No” can be very different. If a Japanese person ask something along the lines of, “So you didn’t like the sweets?” and you answer “No,” they will think you mean “No” as in, “No, I liked the sweets” (Japanese “No’) when you actually meant, “No, I didn’t like the sweets” (American “No”). (I have to start asking if my “Yes” or “No”s is a Japanese or American “Yes” or “No” when answering questions now.) So, with that in mind, this is how our conversation went (and this is the short version):

I think she finally got it after that. But even so, I then tried to explain yet again that what she was seeing wasn’t my natural hair and that it would last for about another month or two. I even lifted my hair AGAIN so she could see the crochet knots. She still didn’t understand, but she kept shaking her head like she did! So FINALLY at home, I showed her this video of crocheting hair:

On the part when they were braiding the hair, she pointed and asked, “Dreads?” And i simply shook my head. But when she saw the girl slip hair through the braids, she flipped out, physically jerking back! She freaked, constantly saying, “EH?! EH?! EH?! EH?!” and shot her head back and forth from my hair and the video. With her still engulfed in shock, I showed her a picture of my real, NATURAL hair, which was in an afro at the time. Her neck jerked. “EEHHH? POOFY!” And to top it off, I showed her a picture of what dreadlocks ACTUALLY looked like. She pointed to my hair and said, “Curly,” then pointed to the picture and said, “Dreads.” That’s when I knew she had finally understood. 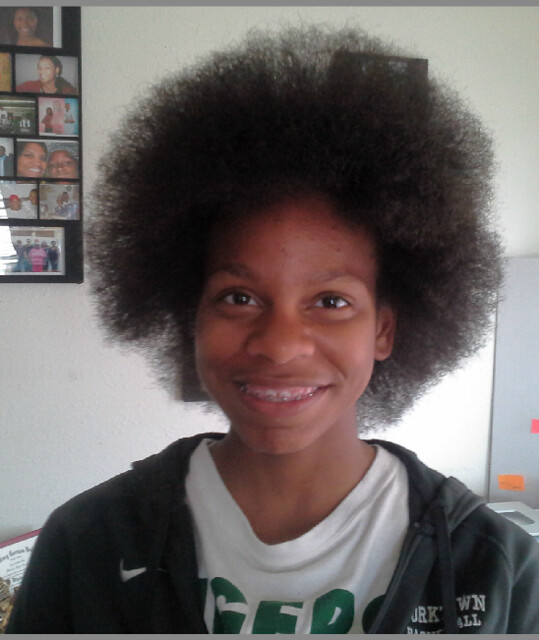 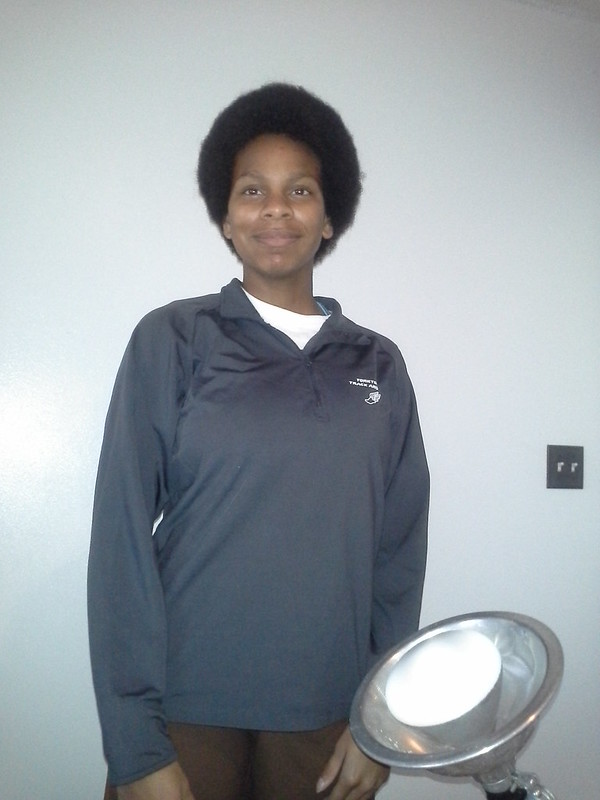 Matted (or wet, curled up) fro

Boggled, she asked me how much it cost to do my hair. I told her that simply doing my natural hair alone was around 30 to 50 dollars (but it depends on the style and how much hair someone has, and I have a thick head of it). Plus, I told her I had to BUY my own hair for certain styles, which made her freak out again. But because my hair is so thick and because there are not that many black hair shops or salons in Tokyo, my hair could cost between 10,000 and 20,000 yen, which is roughly 100 to 200 dollars, in Japan.

Whoo! So far, a lot has been said, but this was the funniest moment of my trip in Japan (besides Yuchi not watching where she was going and running into a still bicycle and my friend, Mayu, bouncing off of a gigantic ball and being propelled forward and onto the ground). It was too good! But imagine the shock my family will have when it’s time for this style to come down and I just start cutting “my” hair . . .