With this event, we’re trying to open the door to people so they understand the whole idea of becoming a host family. This is about getting families interested in other cultures.

(Sorry for the lack of pictures on this post)

I STILL was not nervous, even on the very day I met my host family. So, I just came to terms that this journey will be a peaceful one, and I accept that joyously.

After getting ready for the day, my roommates and I had to clean up the room. And oh my god! The staff made us refold over eight large bedsheets and 4 pillow cases that were going to be tossed and WASHED, and they had us do this  over eight times. They even made us remake our beds because the covers had to be exactly parallel to the floor on both sides of the bed. (Mind you, there were four twin beds in the room, and one side of each of them were pressed against a wall.) End the end when everything was finally “perfect,” we were late to breakfast. This . . . This was Japan at its finest.

After our last breakfast with our new friends, we moved our luggage into the orientation room, and said goodbye as our friends left with their families. However, three people in the Tokyo chapter (like an area), including me, would not be picked up until after lunch. So, the three of us had another small orientation where we received our AFS phones, rules, and guidelines. There, we also met our liaisons, people we can talk to whenever the students or the host families have an issue with said person.

During this small orientation, students who were currently studying abroad in the year program came and introduced themselves to us three. They each had stayed in japan for only six of the ten (or eleven) months of their program, and their Japanese was perfect! They were all so rowdy, vulgar, and boisterous too, swearing like crazy and laughing like baboons. I loved it! (Their excitement of course.) Apparently, one of the Australian girls in the year program liked me, so she gave me her number so we could hang out.

(Side note: there was a girl from another country who had no idea how to speak English, but I thought that was cool for me to know because she still continued to speak to the other English speakers IN JAPANESE so all of them could understand one another.)

At lunch, they were even more crazy. Two girls from the program where cracking up and just speaking to each other back and forth in Japanese. To the side of them were actual Japanese, high school girls. With wide eyes –and I mean wide golf ball sized eyes, they just looked back and forth from the two girls, amazed at their fluency. Finally, they introduced themselves, realizing that they were eaves dropping. But all in all, we had a great chat with the year students. They gave awesome advice, but some advice I neglected. Most of them continued to shout to me, “You’re going to get fat! You’re going to get fat!” I doubt it. Besides, I have to stay in shape for track season when I get back to America! So your welcome, Coaches.

Finally back in our small orientation room, the year students gave us newbies even more great tips: listen to Japanese music, talk in Japanese even if you don’t know what you are saying, study kanji, and “Communicate, damn it!” (how one student put it). It was like a mini questions and answers session with ambassadors.

Then, suddenly, my family arrived: My host father, host mother, and host brother. (My host sister wasn’t there because she was out with friends. It was her summer break.)

After I said my self-introduction to them in Japanese, the first thing the staff had me do was take a picture with them so it could go in the local newspaper. Immediately, I noticed how short they were when I stood next to them. I thought it was pretty funny because I was a towering host daughter.

As we walked down the hall to leave the building, I instantly discovered that they knew English! In my book, THAT IS NOT GOOD because I might only talk to them IN ENGLISH! However, we did have a nice chat. My host mom and dad told me to call them by their first names (adding –san to be respectful of course). And in the car, trying to avoid English, I spoke to them with the broken Japanese that I knew. Actually, it was mostly Japanglish! And to be honest, I actually did pretty well.

My little brother, Harumichi was very excited to meet me. I would ask him questions, and he would immediately try to teach me Japanese.

Finally arriving to their home, Reiko-san (mother), Yoshi-san (father), and Harumichi-kun (brother) showed me around the house. When I asked them if I needed to make my bed every morning, they simply said, “Who cares?!” A whole section of the house is solely dedicated to me. That means I have my own bedroom, toilet room, sink, shower, and freakin’ doorway! Yoshi-san even entered a special security code for me to their high tech door so I didn’t have to carry a key.

The main house is in the second floor. Up there, there is a rule that, every time I come home, I am supposed to wash my hands and gargle water because “It’s healthy,” said Yoshi-san. (I forget to do it every time though.) Finally after showing me three bedrooms, the kitchen, the washroom (they wash clothes every day due to humidity), storage, an office area, and a forbidden office area, I came to the conclusion that I would be living in a fairly large house. For some reason, I believed that all homes were extremely small and only one story, but my situation is not that case. And as I took all of this in, I just couldn’t help but think that all – well, most – of my formal expectation about a Japanese family were shattered. Everyone was so laid back and excited to see me. 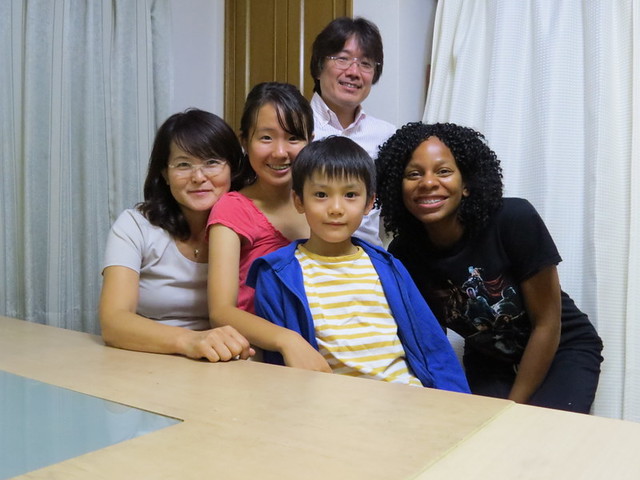 Family Photo; Me and My Host Family

As I waited for dinner time, I played with Harumichi, watching him draw and do a summer project. That’s when Yuchi-chan, my sister, came home. When she saw me, she lit up. “Oh, hello!” she said. (Yes, she knows English too.) At that time, Yoshi-san looked at me, telling me that I had two missions while in Japan: 1) have fun, and 2) improve the language. However, when he said the second part, he would point to his daughter. It was then that I understood that he wants me to improve upon my Japanese as well as help Yuchi improve her English. Outside, I merely smiled, but inside, my insides selfishly screamed that “I am here to learn Japanese! I come first!” But then I simmered down. I don’t mind helping. I guess I can say teaching is also a part of the experience.

At dinner time, the family would speak to me in both English and Japanese, asking me if their sentences were grammatically correct. I would just nod. It was here when they continuously urged me to try new foods. And I’m proud to say that I did because in America, I’m not one to try new things. However, after trying this weird, slimy vegetable, I’m not entirely sure. Whatever I ate, it turned into goo and slithered down my throat. In order not to waste, I gave the rest to Yuchi.

After dinner, it was time for gifts. I gave my host mom coconut argo tea, and she accepted it graciously. Next, I gave my host dad butter cookies, and he simply nodded. I asked him to try one, but he told me that they didn’t’ eat sweets after dinner. (So much for my sweet tooth.) 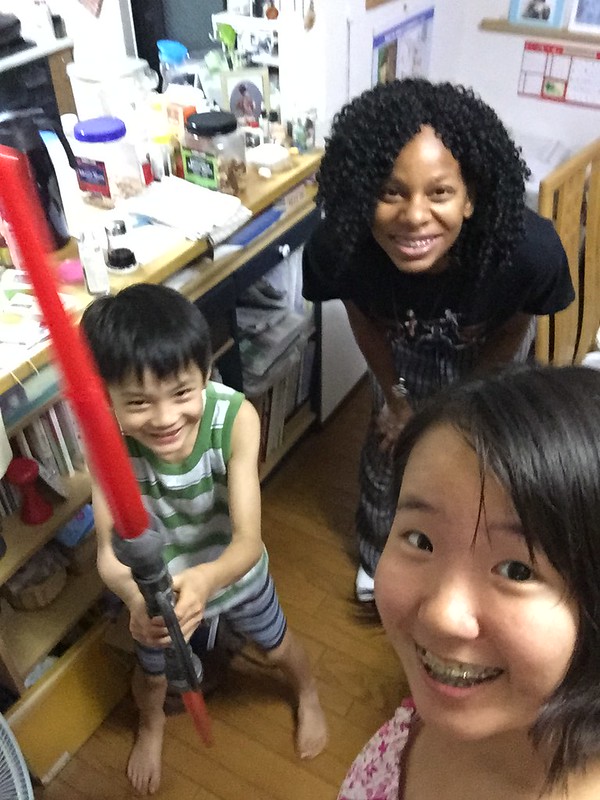 Harumichi (with the light saber I got him), Me, and Yuchi

Everyone was so excited. My little brother was most anxious to open his gift, but I’m so glad I saved his for last. When he opened it and saw that it was a star wars double edged sword, he flipped. “Thank you thank you thank you!” he sputtered.

Finally, the day had settled. I had free time I didn’t know what to do with. So, Yoshi-san helped me plug into the internet, which was quite a process. After that, I simply went to bed, thinking about how lucky I was to score such a perfect host family.

One of the best feelings in the world is knowing your presence and absence both mean something to someone.