One’s destination is never a place, but a new way of seeing things.

It’s the 22nd of August, and I’m still not nervous. I made it to Japan, and there is only one day before I meet my host family, and I still am not nervous. I woke up thinking this. And in all honesty, I still feel this way. There is just something keeping me at peace, but I don’t know what it is. But who cares. I’m just going to roll with it.

I was one of the first of four girls in my dorm to wake up. As soon as I set foot out my dorm to get ready for the day, I got quick glances. When some Japanese people are intrigued at something, they will throw a quick glance, turn and then glance again. Unlike most Americans who whip out their phones. But oh my god! When I was brushing my teeth in the rest room, (not “restroom”. “Rest room” were only sinks are. Toilets are in a separate room), a little girl just stared me down – I mean dead eyed me – while walking slowly passed the doorway. It was funny and creepy at the same time. But it wasn’t until I waved that she quickly sped off.

Anyway, when everyone was ready, we started the day by walking to the cafeteria. And it wasn’t a quiet walk. No matter where I was, cicadas were just chirping away so loudly. And there was this huge, strange crow. I had to do a double-take when I first heard it because it sounded like a man screaming (AHH! AAUUGGGHH!)!

As I waited in the breakfast line with everyone, I noticed children everywhere in sports uniforms. They just eyed us foreigners down. The adults, however, only threw quick glances. When we got to the front of the line, there was this display of food. It was like a menu for the day’s meal. Everything was plastic, but the models all looked so real!

After having rice, miso soup, more gawking, and whatever else for breakfast, it was time to begin the arrival orientation. It started off with a Japanese/English opening ceremony where the staff introduced themselves and welcomed us. After that was over, we each got into eight groups and put on a mini sports day where we each had to partner up for a balloon game. In this game, two people had to place a balloon on the small of their back, lock arms, and race with it. You can’t touch the balloon, and if it happened to pop, we had to blow up a new one. The game was actually pretty funny, especially when people kept tripping over one another.

There were a ton of students from all over the world in the orientation room. So, we all did an icebreaker where each country said “Hello” in their language. Next, we all had a whole session where we talked about safety and useful tips when meeting our host family. But apparently, a lot of trees were killed in order to give us all this information. To end the session, we were shown a video of a girl who lived with a Japanese host family. It was basically a “what to and what not to do” instructional video. After that, we broke for lunch.

Once lunch was over, it was time for some group work. In my group, there were people from Germany, Italy, Spain, and so much more. (I was the only American.) Everyone was so nice! During our group work time, the staff put on a little “classroom” skit for us where they dressed up as high school students in order to show us  what to and what not to do in school. Right after that, it was time for my group to make our own skit. 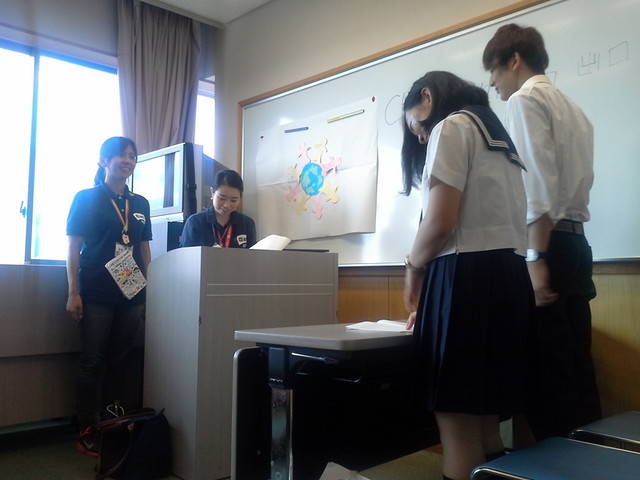 Staff putting on a classroom skit

Japanese people tend to act differently from what they truly feel in order to spare other’s feelings. So for our skit, we had a prompt where we had to contrast inner opinions and feelings from outer behavior. After brainstorming, everyone somehow concluded that I would act as an “angry” American. (Have any of you even seen me angry? [Family is excluded from this question].) After practicing the skit, we moved on to the next session – the Boys and Girls Talk – which had even more skits! Though the skits acted out by the staff where hilarious, it covered serious topics like: harassment, periods, safety, and communication.

Then, we had a departure meeting with all of the people in our prefecture (which is Tokyo for me). We simply discussed where we were to go the next day when our host family came to pick us up. After that, we went to dinner. 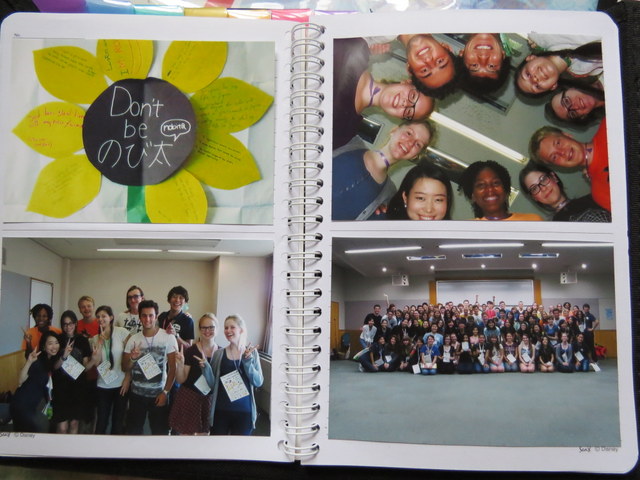 Finally, it was time for the closing ceremony. For this, each group performed their skit. For my group, we were the last to perform because none of us wanted to raise our hesitant hands. However, the best was saved for last. For our skit, everyone sat in chairs that were aligned as though we were sitting on a bus. Each of us acted as though we were asleep (besides the bus driver). Suddenly, a loud blabbering girl comes onto the bus, yelling into her phone and waking all of us up. (In Japan, it’s rude to talk or be loud on a bus or train.) At first, no one said anything. We all just threw quick glances at the girl. Then, I suddenly stood, and everyone froze. I walked around all the frozen actors, resembling their hidden emotions. I yelled at them, telling them to get angry at the girl, telling them to tell her to get off the phone. Don’t spare her feelings! We needed sleep. Then, I sat back down, and everyone was animated once more. (Sorry. I didn’t get a video of this, but it was awesome.)

The staff was genuinely amazed at our performance. They described it as “natural,” “professional,” and “mature” with a very deep meaning. Yay for us!

Next, we had a mini talent show. There were over one hundred students there, yet only three – count ‘em – three students signed up for the talent show. One was a juggler from Spain, and he was actually amazing with all of his fancy tricks! Then, a girl played a song by Elvis on her ukulele. Lastly, my roommate sang the national AFS song. For this, everyone stood, made a huge circle in the room, and rocked from side to side. Somehow, our rhythm was off, and people kept rocking into one another instead of harmoniously. I only say this because I was one of the people in the center being squished. But all in all, we had a great time. My roommate is an amazing singer too! And for the grand finale, the staff put on a dance for us.

Finally, the orientation was closed with speeches from bold students who wanted to stand and speak out. It was funny too because the staff kept telling the audience not to get up during the speech, but no one listened.

After tears were shed and laughs were heard, we all dispersed, taking our final baths together and preparing for bed. For tomorrow, we each meet our host families. Tomorrow, our journey really begins.