Throw your dreams into space like a kite, and you do not know what it will bring back: a new life, a new friend, a new love, a new country.

I woke up early on the day of my flight to Japan – two hours early to be exact. It was nearly five o’clock. I suppose it was the excitement. That or the uncomfortable pillows because I woke up with a HUGE knot in my neck that continued to hurt throughout the day.

Anyway, I still wasn’t nervous, even thought this was the day that I would finally go to Japan. When it was time for the Japan students to eat breakfast, the China and Indonesia students left early for their flight to their countries. Meanwhile, we “prompt” Japanese students missed our shuttle due to two missing girls. But don’t worry, a second bus came for us. Oh, and we found the two girls. But before we boarded the shuttle with all of our heavy luggage, we took a traditional AFS “Gateway Departure” photo with all of the Japan students by a beautiful fountain. 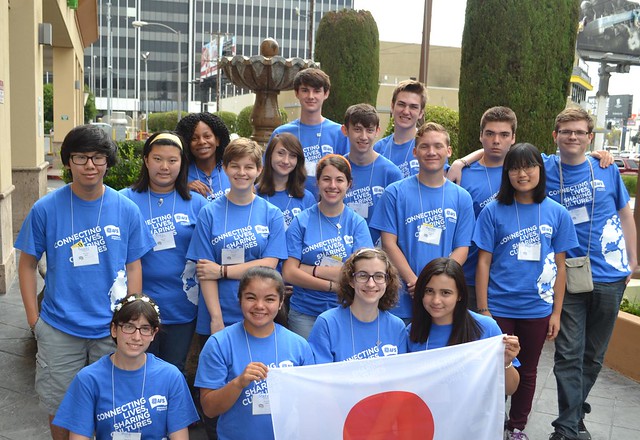 All of us AFS students were loud when arriving to the Los Angeles Airport. Mind you, we were all wearing blue AFS T-shirts, so we already stuck out like a sore thumb. Still, everywhere around us was loud too, but I tell you this for a reason. So, just keep in mind that we were very loud American students.

After we checked into the airport and dropped off our bags, we were released like wild dogs. That’s right! The staff just waved a hand goodbye and took off. All the students were on their own with no chaperon. Lucky for us, we had a leader within our large group. Make that two. One would lead our scrambled pack, and the other would follow. Somehow, we found our way to our flight gate through all of the cluster. We even found a currency exchange machine to trade in our American dollars for Japanese yen. (I think we were ripped off though. I got 7,000 yen for $80 at the LA airport, but in Japan, I got 8,000 yen for $63.) 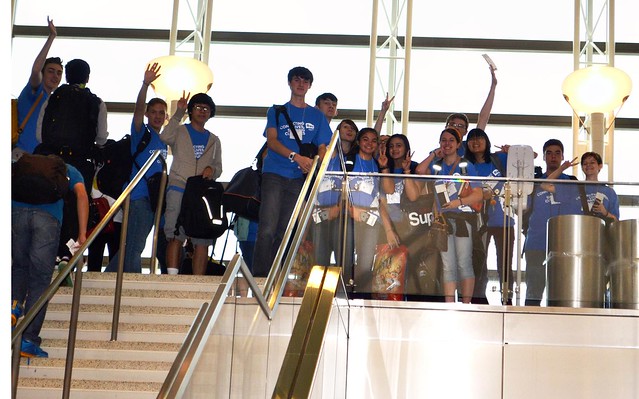 Waving “Goodbye” to the AFS Staff

At our gate, we all waited for about two to four hours. Some of us were drawing, writing, chatting, and listening to music. But even then, our stomachs were churning! We were going to Japan! And during that same time, we saw the students departing to Indonesia. They hugged each of us goodbye before boarding their plane. That just goes to show you, in such a short time, we impacted many people and made many friends.

Finally, it was our turn to board the great JAL plane. It was so huge and wonderful! There were TVs, hot towels, and everything! And the staff was amazing! Always smiling and laughing (well, some). I sat in between my roommate and some guy on the flight, so I was happy about that too.

After a 16 hour flight with watching Avengers: Age of Ultron, Fast and Furious 7, using two hot towels, rubbing out the crimp in my neck, elbowing the guy next to me while trying to find the perfectly comfortable position to sleep, dozing off with music, and eating two Japanese/Chinese style meals, we finally landed in Japan.

Do you remember how I mentioned us noisy American students? Well, as we all stumbled into the huge, gorgeous Japanese airport, immediately, I noticed how quiet it was. It was almost like a grave. All you could hear were footsteps and bags rolling about. Then there was us foreign Americans in our blue corner with screeching voices and conversations. We were getting so many stares, we had to tell ourselves to shut up over ten times. Just being foreign alone, we already stuck out like 17 sore thumbs.

And oh my god! We got lost so quickly. We had no clue where to go, yet our pack walked like we had made the architectural plans for the structure of the airport. Finally, our confidence faded, so we asked a worker for help. However, it quickly came to our knowledge that we were no longer in America. The guy kept speaking Japanese and pointing in one direction, waving his arm two and fro. We all just smiled and walked off, having to turn back around at least two times. Finally, we lost puppies found our way through foreign customs.

After showing our passports and visas and getting our fingers scanned, we were officially in Japan.